In my last entry, I mentioned an informal "club" that I participated in where we built some modules and worked on home layouts in a round robin style. That group was called the South Jersey Workshop and the idea was based on the Hartford Workshop, a group of modelers in Connecticut that worked on each others layout. The group started out with members who participated in another, traditional model railroad club but were each interested in starting personal layouts. 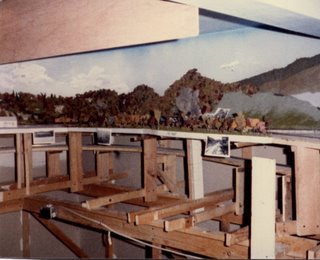 I dug through some old photos and found 2 pictures from about 1988. Not the greatest quality, but they do show what we were doing at the time (Interesting how today with digital cameras I take pictures of everything and sort through them on the computer, but when it was film that had to be developed I was much more selective before pressing the button).

The first photo here is from Glenn and Diane's layout. It depicted the Rutland from Bellows Falls to Rutland. This was the first scene, Gassetts, VT. Diane really did some great scenery here and we did get the foreground and fascia in later. To the left, the layout crossed the entrance to the room on a drop bridge into a workshop area. Under the top level is the lower level. The layout used an alternating upper level/lower level scene, giving space between each town on each level, with the backdrop creating a shadow box type look. 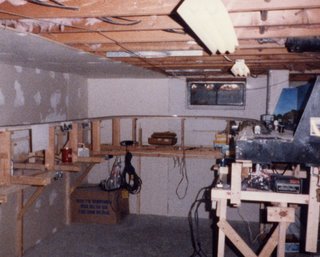 In the next picture, this is to the right of the Gassetts picture, turning 90 degrees. Here the layout continued down the wall, across the far wall and back up the wall to the left. At this time, Rutland yard (and the hidden Whitehall staging yard) were not built. The 2 modules we first built as a group are temporarily added here to the end of the mainline so we could run trains back and forth. I really wish I had more photos documenting our accomplishments on this layout.

There were a lot of good times working on the layout with Glenn, Diane and our friend Anton, plus a few others here and there. The SJW concept worked well for us. We all learned a lot about building layouts and we got a lot more accomplished then if we worked alone. A few years later we started work on a layout in my home. Glenn helped a lot getting the basement area ready and then handlaying some track. 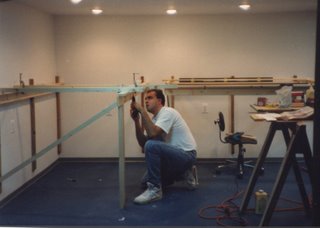 Here you see me doing some early benchwork assembly on the area of the layout to depict Bartlett. This photo is from October 1995. A lot of the concepts learned on Glenn's layout and then this layout were applied to my current layout, such as the benchwork style and spline roadbed assembly.

In this last shot, we see more of the Bartlett benchwork completed. The corner location meant that we were going to include the wye in Bartlett. The tail leg was going to be used for a continuous run option and that is where the loco and boxcar were sitting at the time. This area progressed to full trackage with handlaid code 70 and code 55 track featuring switches built by Glenn. A move from this house in 1996 ended the layout. But one thing I realized from the trackplan and what I had built is that the layout I was building, Portland staging feeding into Bartlett, Crawford Notch, Whitefield and finally St. Johnsbury, was going to be faithful but did not offer too much in the way of operations. 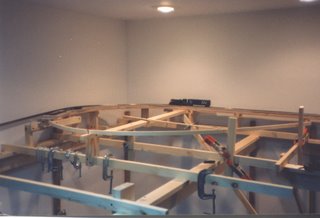 The St. J area would have the most action, including north and south Canadian Pacific staging and a short Lamoille Valley staging track in the electrical closet. These lessons were important as I planned my current layout and found that focusing on St. J offered the most operating potential for the era and geographical area I wanted to model.

As for the South Jersey Workshop, Diane moved to New York a few years ago and Anton is curently living and working in Maryland. Anton did help out on a lot of the initial benchwork on the current layout when it was started in 2003. So the SJW is somewhat in hibernation I guess, pending visits from past members for work sessions (hint, hint) or bringing some new people into the fold. My advice: In the area where you live, look into establishing a round-robin group like this. There are many benefits and it can really boost your ability to get things accomplished on the layout. You'll make some great friends along the way too!
Posted by Mike McNamara at 10:17 AM No comments:

(Note: The idea for this web log was inspired by a similar blog by Mike Hamer. Mike actually hosts a few blogs, including the bostonandmaine.blogspot.com blog and the www.fridaynightgroup.blogspot.com blog. Both are very interesting with great pictures and I highly recommend a visit to both) 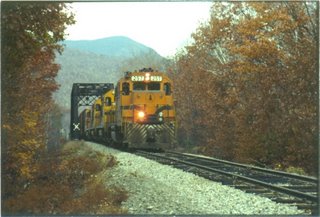 My interest in model railroading goes back to having trains when I was young. My parent's gave me HO trains at Christmas and helped me set up a 4' x 8' layout in the basement. They supported my "hobby" by giving me additional gifts of cars, structures, etc. as I grew up (in the 1970s). Meanwhile, our family would go camping each summer in the White Mountains of New Hampshire. At this time, the Maine Central ran regularly through the area, Crawford Notch and Twin Mountain, on its way to St. Johnsbury, Vermont or back to Portland, Maine. Seeing these trains helped cement my interest in railroading and model railroading.

One Christmas, my parent's included a Railroad Model Craftsman magazine with my gifts. Included in this issue, the October 1980 issue, was an article about the ball signal at Whitefield, NH. Wow! This was a place I had been to. Along with the other articles and photos, this feature helped me realize that playing with trains could be based on what was going on out on the real railroads. I would say this is the point that I became a model railroader. I started getting more copies of RMC, including back issues, and started learning a lot about model railroading. The Editor's Notebook column in RMC written by Tony Koester really influenced how I perceived model railroading should be done, how things should be based on the prototype and how operations could really enhance your enjoyment of the hobby.

At this point, my main prototype knowledge was the current day Maine Central running through New Hampshire. That became my modeling focus and remains so to this day. It was probably the purchase of the MEC by Guilford and the abandonment of the Mountain Division through NH that kept my interest locked into 1980 or so.

My model railroading was helped along by having the good fortune of quality hobby shop in my hometown, Sattler's Hobby Shop, in Westmont, NJ. I was lucky enough to also work there for a little over 1 year while I was in high school. It was from Sattler's that I learned about the Gateway Model Railroad club and soon I was visiting their large layout in Gloucester. I soon became a member and learned many new skills over the next few years. I also had the good fortune to meet Glenn Salvatore and his wife Diane, members that also had an interest in New England railroads. (The top picture on this post was taken by Glenn in 1981). Soon after Glenn and Diane moved into a new home, we set up the South Jersey workshop, a modeling group that functioned like a club, but without the politics, dues and other "club" issues.

Our first project was a pair of HO modules based on North Stratford, NH. These would be my first "real" model railroad as I would consider it as it was fully wired, had scenery and was used in a few local modular set ups. Next, we started work on Glenn's layout, which featured the Rutland line between Bellows Falls and Rutland, VT. We met weekly at Glenn's for a number of years, and had the layout open for a local NJ Division NMRA Meet. We also started a layout in my home based on the Mountain Division between Bartlett, NH and St. Johnsbury, VT. Sadly, Glenn's health deteriorated and I lost my good model railroad friend in 2000. (I do remain freinds with Diane, who has since moved to NY state.)

In 2002, we moved into a new home with a nice basement and plans were underway for a new railroad. I knew I would still want to model the Maine Central in New England and the timeframe would be the late 1970s to early 1980s as that was the focus for much of my model building and research. How I came to choose the theme for my current model railroad will be the topic for a future post.
Posted by Mike McNamara at 4:00 PM 6 comments: