As 2012 draws to a close, I have some updates from work accomplished in December. It has been a busy month with travel and the holidays, but I have managed to find an hour here and there to get some stuff done. 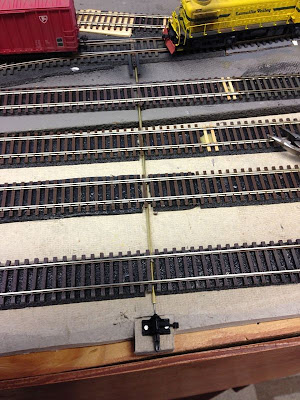 First up was the trackwork in Morrisville. I soldered feeders for the frogs and dropped these to a central spot for attaching to Tam Valley Depot Frog Juicers. Next I installed the Caboose Industries sprung ground throws, which I had on hand from previous layouts and projects. I did not want these to be in the scene or for the operator to try and work their hands across yard tracks to reach them (imagine the throw at the right being reached if it was at the turnout and the yard tracks are full). So these were mounted along the front edge with music wire throw rods routed through brass tube (both from K&S). I have seen this occasionally on other layouts for hard to reach turnouts, and also on one local layout where they were all mounted along the front like this. Installs went pretty easy. Only hard part was routing tube under some track mounted directly to Homasote. In a couple spots I had to remove some plastic from the tie strip under the rail, and also make sure to insulate the brass rod to prevent a short circuit between the 2 rails (using electrical tape). But most places were easy as the track is up on foam roadbed.

The ground throws along the edge will be out of site and easy to reach. The brass tubes allow easy movement of the throw rod and will be hidden by scenery. I was asked about using under track controls, like a Blue Point or Bull Frog. First, I wanted to make use the ground throws I already had on hand. Second this spot really lended itself well to quickly and easily mounting them along the front edge. Third, I did not have much space to mount throw rod controls as I put a shelf section under this yard. The rods could probably still be fit in, but it would have been harder and more time consuming to do. So it came down to money (I already had what I needed), time (the ground throws go much quicker in this installation), and final appearance (the rod controls in this area would either not be recessed or not as easy to access for the operator). 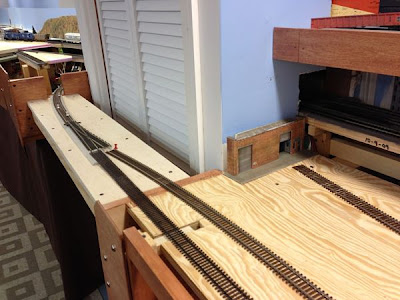 With that complete it was on to Groveton. I completed assembly of the slide in bridge section in front of a closet which will allow the B&M track to cross from under Whitefield over to Groveton. It is wide enough to keep any derailing cars off the floor and also have a turnout here to extend the length of the passing siding and main. The bridge will simply slide into place and hit stops. I will add a piece of fascia to the front and some sort of lock to keep it from moving. Most of the time I do not need access to this closet, and never during an Op session. 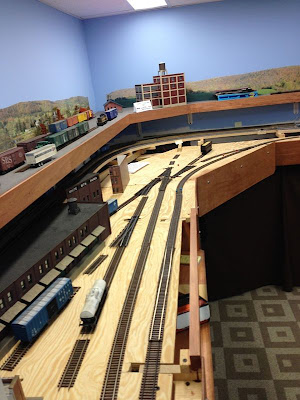 I then tried out various track arrangements to get what I was looking for. The the train will need to arrive on the main (at right) and use the passing siding to place pulled cars. When done the loco will need to run around the train to leave. There is also a facing point turnout for woodchip unloading (car spotted there in far end of photo) as well as the passing siding being the interchange track for cars to and from the Grand Trunk. So a little thought ahead of time will be needed for an operator to switch this area. Not too difficult or unrealistic, just more to add to the fun. I removed all the track and installed the Homa-Bed roadbed. I could have used a solid piece of Homasote, but I like the idea that I can scenic the tracks as elevated better this way, plus I still have a good deal of Homa-Bed remaining to use, and no Homasote sections! So again, use what I have instead of buying something new. 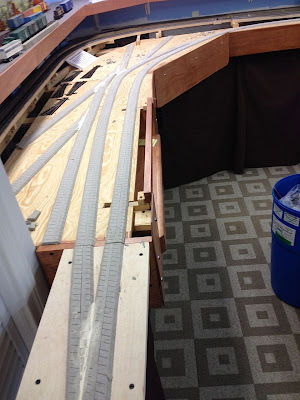 I then started to lay the track, transitioning from the Code 100 hidden track to Code 83 and onto the bridge section. I used PC Board ties so I could run the rails right to the edges and keep them as secure as possible. Again, the bridge is not supposed to be moved around too often, but I wanted to make it as easy as possible with no special connector rails. I will need a single plug to power the rails on to shelf section though.

For the PC Boards, I installed flat drywall screws and filed the tops clean to accept solder. I ran the track right across the joint and then marked which ties needed to be removed, and then used latex caulk to lay the track. When dry I soldered the rails to the PC boards. I made up guard rails and soldered these in as well. When all done, I used a cut off disc in a Dremel tool to cut the rail. The result is rails that align perfectly.


Now it is on to the rest of the tracklaying in Groveton. I have enough track and all the turnouts, so this should continue to move along. Once the track is done, and wired, and the ground throws installed (I think this area also lends itself to this type of installation), I can paint the track here and in Morrisville. But I don't plan to do anymore scenery than that. I want to continue to focus on installing the rest of the track, so it will be on to Whitefield to connect the B&M to the diamond with the Maine Central, as well as installing the couple of sidings there.

I can then move onto the last local areas needing trackwork (besides the mainlines which are in place), Johnson, Sheldon Jct., Lyndonville, and North Stratford. But I do not have to get these done before holding an informal Ops Session, one to just get people acquainted with the layout and run a portion of the train schedule. My goal last summer was to do that during this winter, and with Morrisville and Groveton in place, I think that is feasible. So the goal will be sometime in February or March to do that. Here's hoping I can keep that New Year's Resolution!
Posted by Mike McNamara at 12:01 PM No comments:

The layout was opened for two days in November and I had about 80 total people come through, less than last year (when a newspaper article covered the open house), but still a good number with some new people and some regulars. As usual I always forget to take pictures while people are visiting. I just get busy talking to people while also keeping an eye on the running trains. But with the layout all cleaned up I did take some pictures after the last visitor left. For those that could not make it this year, these pictures will help convey the current state of building progress.

Posted by Mike McNamara at 11:07 PM No comments: