Saturday here and the weather has stayed cloudy with the threat of rain. We got some tips about a lot of CSX westbound traffic moving on Saturday mornings, so we are going to head out and see what we can find before going to the hotel for some clinics and more layouts this afternoon. More to come later today. 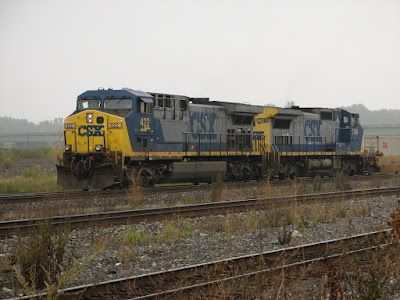 LATER: So we spent quite a few hours at an area just west of DeWitt yard watching the trains. It was probably a little lighter today than a weekday, but still plenty of trains for us. We were able to catch the usual CSX power as wel as an Amtrak train. But UP power on one train and BNSF on another was a real treat for us. Mostly I shot video, but here are a few pictures I got whil etrying to juggle the camera and the camcorder at the same time. 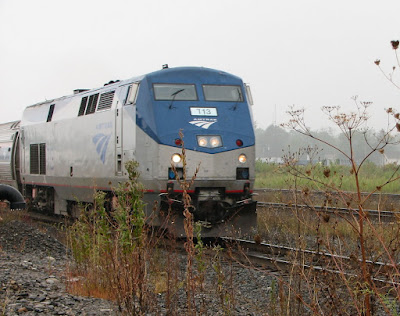 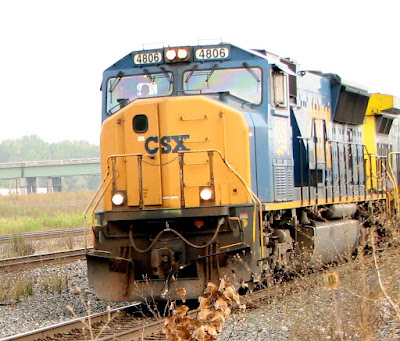 A couple trains were manifest freights and I was able to see some older MEC and B&M cars (not the Guiolford versions, but the 1970's schemes. Also going by was this neat Ontario Northland car in original paint plus a CV blue boxcar. You can see it has been relettered for FEC. 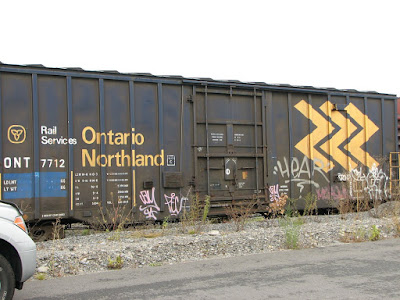 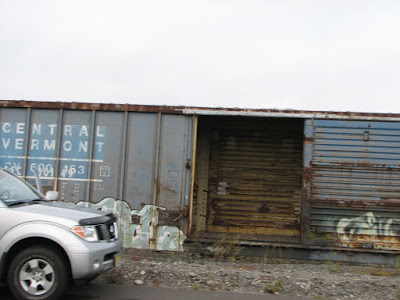 After this extended railfan session, we were able to get to a couple of layouts and another interesting hobby shop. Brian Curry's N scale layout was terrific and really shows that great modeling looks great regardless of the scale. The video I took could have easily been an HO or O scale layout if you did not know better,

Now it is off to the banquet to wrap up festivities. I'll post a wrap up entry tomorrow.
Posted by Mike McNamara at 7:24 AM 1 comment:

Friday starts off cloudy with rain threatening. I registered late for this convention so I am not doing any of the prototype tours this year. Instead the focus will be clinics, layouts and railfanning. After breakfast in the Hampton Inn lobby (got to love that free breakfast buffet they all have!) we headed over to the Holiday Inn convention hotel to get registered. A contingent of NJ Division modelers was found wandering the area (PJ, Bruce B. and Bob P.) and we traded notes on what was seen so far.

Anton and I decided to get some railfanning in before the weather turned bad. This worked well as most layouts did not open until the afternoon anyway. We headed over to Solvay yard where the CSX interchanges with the Finger Lakes Railway. Lots of big industry here such as Crucible Steel, a paperboard mfgr. and several chemical industry receivers. We scoped out the entire area and watched the ex-CR FGLK Quality diesel do some switching, but by now some rain started to fall. It was still early so we decided our best bet was to take advantage of overhead shelter and do our railfanning at the Syracuse Transportation Center, shooting trains from the Amtrak platform. We were quickly rewarded with a CSX train already passing by as we ascended to the platform. Next up was an Amtrak commuter train (Buffalo-Albany). While this was in the station a westbound CSX passed by. We quickly got our cameras repositioned to catch the train.

Listening to the scanner was fun too. There was some back and forth between the ND dispatcher and a work train trying to get track time to do their work. The scanner was vital too to find out when trains were coming of course. Both an eastbound and westbound train were in the area and sure enough the headlight of the eastbound was soon upon us. However the westbound track was now showing a green signal. As luck would have it both trains would be passing right in front of us. I did my best to get a still shot of the eastbound before switching to video to get the westbound. 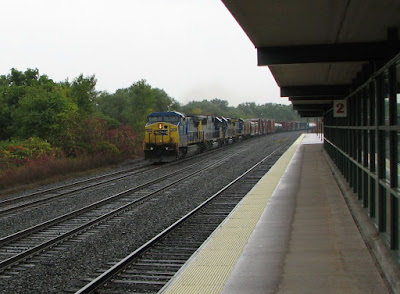 The scanner talk died off, so we decided to get lunch and head to another trackside location to eat and wait for more trains. As luck would have it we missed two trains while trying to find a suitable spot to park trackside. The first "train" that passed us by was this CSX track car: 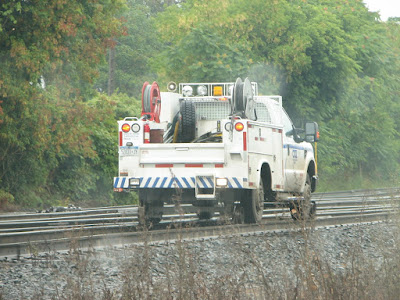 Later the Amtrak Maple Leaf snuck up on us but I was still able to grab a shot: 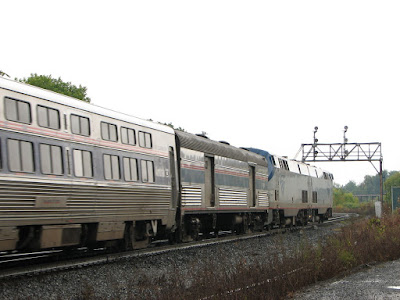 It was then time for some layouts and we headed off to see a nice Pennsy layout featuring Horseshoe Curve. Now, coming from an area outside Philadelphia you might think the last thing that I'd want to go see is a PRR layout. There are plenty back home, so PRR is not high on my must-see list. But this layout was really great. The wharf scene alone was easily 8' x 12' and was incredibly detailed. In fact all the areas were great like this and we were really happy with our decision to visit this layout. (This layout was recently featured in RMC).

We also made a stop a Central Hobby Supply to exchange some money for hobby items and then went to visit a new developing layout that featured many of the areas we have been railfanning. Dewitt Yard, Solvay, CSX, Finger Lakes, it was all here. We could find the places where we stood trackside to take pictures. It will be nice to see how this layout develops once scenery and structures are added.

Back at the convention hotel, we checked out a couple of clinics, including Earl Smallshaw talking about a new section he has finished on his classic layout (one of the structures was scratchbuilt 55 years ago!). A clinic on using photos for backdrops was interesting and made me think about some areas I might be able to incorporate some photos onto the layout. There was time for one more local layout, an N scale D&H, before calling it a night.
Posted by Mike McNamara at 11:03 PM No comments:

Like last year, I am at the Fall NER Convention and will be posting what is going on here to my blog, at least once a day, maybe more. Day 1 (Thursday) is the drive up to Syracuse NY. I have not been this far west for an NER convention yet (furthest before was Utica, so the area is new to me.

CP Rail modeler Anton M. is joining me for this year's pilgrimage. We made our way into Syracuse by mid-afternoon. We were pacing an NYS&W train along I-81, but were unsuccessful in getting off in time to set up and get a picture. We did get to a good location but just as the engines were passing by. The train was moving! Once in Syracuse proper, we decided to check out the railfanning opportunities and headed towards the west end of the area near Solvay yard. Using the July Railfan & Railroad magazine we found an overpass and a road that put us trackside just east of Solvay yard. I got the scanner set up and soon we heard an Amtrak train approaching and it was quickly upon us. This was quickly followed by a CSX intermodal train. It was pretty easy to figure things out by having the R&R map with CP locations identified. It has been a while since I was able to do some real railfanning where there was a good density of trains and this was fun! 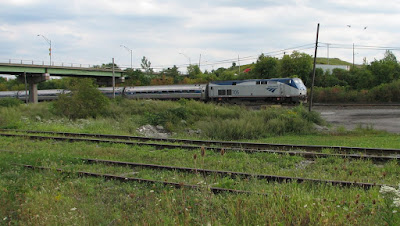 Next we tried to find where the NYS&W moves through Syracuse, and although we did, it was easy to get lost and stuck in downtown traffic. Eventually we maneuvered to CP 286 on the CSX just west of DeWitt yard. We found a good location trackside and were rewarded with a train right away. The scanner picked up notes from the Dispatcher about a train moving from track 2 to track 8 and we were able to see the switches being thrown to do this. Soon the train was snaking through switches and moving past us. The dispatcher was talking to another train with 5 cars for Solvay and soon that too was going past us. 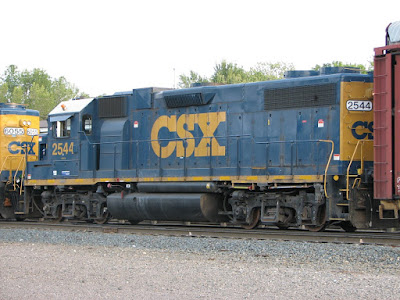 We finished up by scouting out the DeWitt yard area to be prepared for more railfanning later in the weekend. Near the east end we found a god spot to watch as the yard switchers worked a cut of cars using a GP40-2 and a GP38-2. 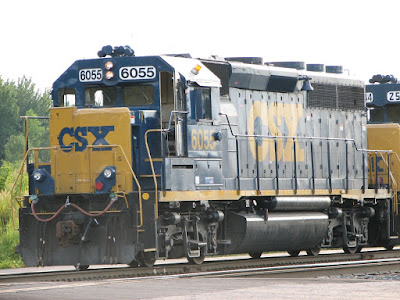 As it was getting late we decided to head over to the hotel and get checked in. We are not at the convention hotel (it was full when I tried to book), but just down the road at the Hampton Inn. After getting checked in, we looked over the layout book and had time to visit a couple of layouts and get some dinner before calling it a day.
Posted by Mike McNamara at 10:46 PM No comments: