Although I planned to update the blog during the weekend of the convention, I found myself just too busy to do so.

I headed up to New Hampshire and spent Thursday morning driving up to Franconia and Crawford Notches. Big difference in scenery - the Laconia area was pretty much at peak color - the Notches looked leafless and ready for winter. Still it was cool to visit these areas, and I did get a picture of the Crawford Notch state park sign I needed for the layout. I also headed up the road to where we camp in the summer, but the campground was closed due to the government shutdown.

Here are a couple pictures. First is the Crawford Notch station, which really shows the lack of foliage on the hillside. Next is a Mt. Washington Cog Railway locomotive and passenger car, relocated down to the intersection of US302 and Rt. 3 in Twin Mountain. I assume the steam locomotive is now surplus as they converted from coal power to diesel up on the big mountain. In the third picture, further south, you can see how much more foliage there is beside this Boston & Maine bridge along the Pemigawasset River. 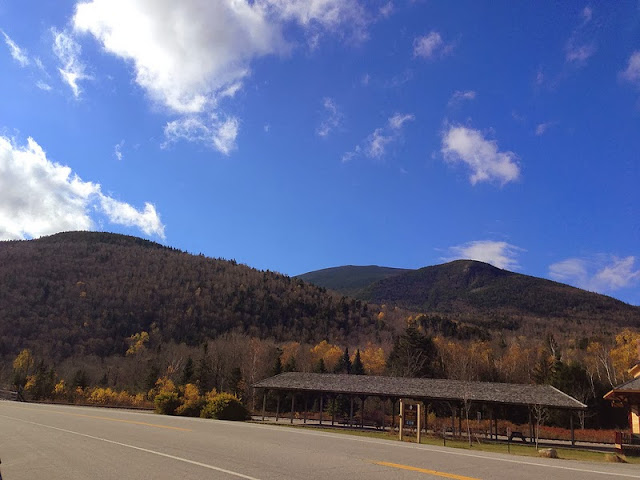 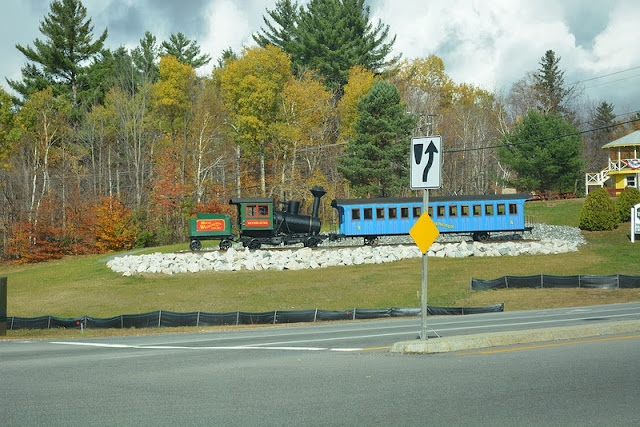 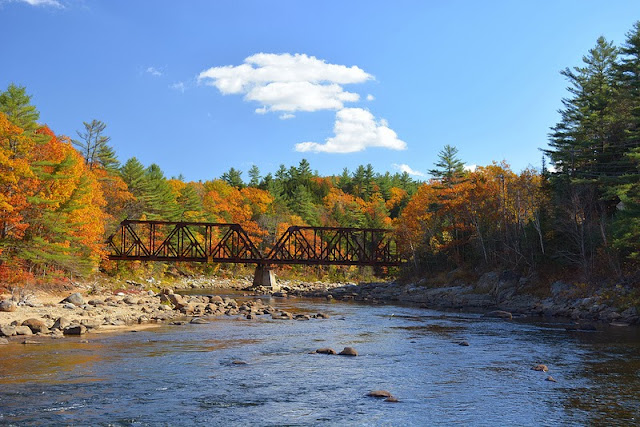 Here is a link to all the non-train photos I took in case you want to check them out.

Thursday afternoon was set up time for the Free-mo layout. It was tough to really get a picture of the overall layout as it was long and linear. I think it was in the neighborhood of 160 feet of mainline. The picture here shows my module being operated by a guest, with a large portion of the layout going down along the wall, turning right and continuing along that wall to the doorway. Not seen is the large return loop that my module fed into. 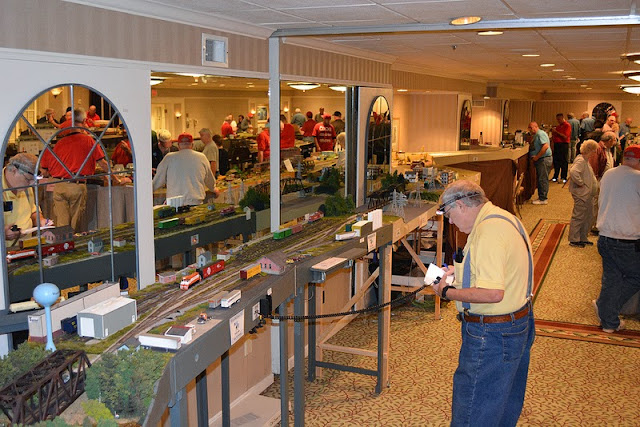 A full set of Free-mo layout pictures are up on Flickr, so I'm not going to repeat them here. Here is the Flickr link:

The New England Free-mo guys were great and really had their stuff planned out. Set up was quick and efficient. My module fit in with no issues and James Koretsky's CAD planning fit the layout into the room perfectly. Fred Hessler came up with a great operating scheme and we hosted numerous sessions Friday and Saturday. I had a great dinner at a nearby restaurant with the guys Thursday night. Friday I presented my clinic on the St. J & LC, which went OK, although it was a bit disconcerting to have such knowledgeable people in attendance, many who know more than I do about what I was presenting, and I know as a result I was a bit off. Hopefully everyone enjoyed it and learned a little something. Saturday, after more Op sessions, we took the layout down, and I attended the banquet. I left early Sunday in order to get home for some other planned activities.

All in all a really good time. Taking the modules to another group and setting up again proved the value of Free-mo. We had no issues integrating my modules into another group's modules. The weather was really nice, the convention site terrific, and just being up in New Hampshire in October a real treat.
Posted by Mike McNamara at 4:13 PM No comments:

This November I will again be opening my layout up for visitors during Model Railroad Month as part of the greater MD-DE-PA-NJ Open House Event. A complete list of open layouts is at the model railroad open house web site.

There are a large number of NJ area layouts open both these days, so it is worthwhile to plan your route along the I-295 corridor to get the most bang for your buck. There is one layout 10 minutes to the west of me, and another 10 minutes to the east, so you can easily see those 3 layouts on one of the days.

One more open house will occur as part of the NJ Division's Meet in nearby Delanco on Saturday November 16, 2013, from 1pm to 5pm. The Meet itself will be in the morning with clinics, and other area layouts will also be open. See the Division's Web Site for more info on that event.
Posted by Mike McNamara at 3:04 PM No comments: