Some Words for this Wednesday!

In addition to tweaking the Operations and getting ready for the next planned Op Session, I want to get back to doing a bit more actual modeling. Some of this would be making trees and installing them along the backdrop at Crawfords and down through Whitefield, I think having a complete tree line between the tracks and the backdrop will really help give a more finished look to the layout in that area. So I am preparing some Super Tree armatures for painting and flocking.

I also want to get track in the remaining few areas completed. I'd like to tackle the North Stratford area up on the shelf above Groveton first. Right now Maine Central trains TY-2 and the returning YT-1 simply depart and arrive on a single track here. Adding the interchange with the Grand Trunk and the North Stratford track will mean some work for the crew to do here prior to departing, and then again when returning. It won't take a lot of track either, just a few turnouts and some flex track will do it. So I'm finalizing the track plan there and making a list of track components I will need.

And finally, I want to address the lack of structures on the layout, and in some cases the replacement of stand-in structures (I'm looking at you, generic Walthers grain mill in Sheldon Jct., looking particularly non-New England!).

To start with I dug out my kit of Crawford Notch station that I acquired, oh...about 20 years ago, and started work on it. It will be located right where you enter the layout area, so it will be good to help get that scene to completion and make a good first impression.

Some filing and sanding of the resin parts and cutting out the window areas to start. Then I needed to take care of some warping by dipping pieces in hot water and laying out on a flat area. Overall a pretty nice kit just a little different than what I have done in the past with wood or styrene. I have competed painting the wall sections green (there are many of these!) to match the depot as it looked circa 1980. A few trim pieces are a light gray. This is just before the more intricate paint job it still wears today that seems to have been applied around 1983. Installing window glass and then on to building up the walls on the base. I'll post more pictures of that as progress is made.

For now though, lots of other Holiday activities, so I probably won't get too much more done until January. And in January I'll have to get the modules ready for the Free-mo layout set up in Springfield MA. Plenty to keep me busy!
Posted by Mike McNamara at 1:13 PM 1 comment:

That title sounds like a Trans-Siberian Orchestra song doesn't it? :-)

With the MER convention  and open house in November now in the rear view mirror, I have had some time to evaluate things and plan my next projects. High on the list is to maintain regular Op Sessions. These may only be every 3 months or so, but I think it will be important to move things forward. With what I learned at each session I am able to develop a plan for what needs to be addressed and worked on. These would be things in addition to any regular layout building, i.e. scenery, structures, etc.

First up was some revisions to the waybills. Seeing the guys use them has identified some areas for tweaking. There is a big difference in reading a waybill when you are the layout owner vs. a visiting operator. Destinations for example are most important for the operator to understand quickly. It doesn't really matter what the destination is as long as the operator understands what that tells him to do with the car.

I previously posted about using a color in the upper right hand box to help the St. Johnsbury yard crew classify cars by destination railroad, Orange for MEC, Yellow for LVRC, Red for CP North and Blue for CP/BM South. I added a new color, Purple, for CP 937, hot cars off of MEC RY-2 that go on this train. These arrive in a block and quickly depart. But it should help the crew in breaking down RY-2 when it arrives.


I also previously posted about a subtle change to the waybills as far as Destinations were concerned. I thought I would expand on that a little more now that I have been working on that.

When I developed my waybills I utilized the Op Sig database to come up with prototypical off-layout destinations and shippers.While that is fine and interesting to those who care to read the details, one thing I think I made a mistake with was on the routing line, the "To Station Name" box. Having a To routing of Detroit MI for example does not really help a crew or operator understand what needs to happen with that particular car. Does the St. Johnsbury yardmaster put it on the westbound LVRC train, the northbound CP train, or southbound B&M train?

An operational aid for the yardmaster will help tell him that a car for Detroit should go on the CP northbound 904 train. That train is destined for Newport and then Montreal, and the car will eventually be routed to Detroit from there. This aid would be a list of destinations applicable to each train passing through or departing the yard.

But even something like this could still be unwieldy. What if 5 cars arrived with 5 different destinations, and each one was checked against this list to determine which train the crew should route the car on? It takes too much time to scan a list for Destinations and find the appropriate trains.

I decided it made far more sense to limit all my To Station destinations on the waybills to either the town on the layout where the car will end up, or the destination of the train which will carry that car.

Going back to my Detroit example, the Consigneee box can still list Detroit, but up at the top where the operator looks for the To Station routing it will say Newport VT. Newport is the destination of only 1 train, the CP 904.

Taking that one step further, I am making sure my From Station names are also matching the origin point for the trains. Portland originates the daily MEC RY-2. Not as critical but sometimes it helps for operators to know where a car is coming from. (I can also tell you that it helps me immensely when it comes to restaging the layout!)

An example of a car being delivered on-line is shown below. East St. Johnsbury is on the layout and when that car arrives in St. Johnsbury, the crew will know that all E. St. J cars go on MEC YQ-1.

One further step to help the operators: For all cars destined to an on-line industry, I am highlighting the consignee box. This will help alert the crew that this car is going to be spotted by a local train, another aid for yard crews and also local train crews to distinguish between cars to drop and those to carry through to the destination.

I think these simple changes will help the crews and provide consistency for those that attend multiple sessions. At the St. Johnsbury yard it will be easy to spot destinations on the car card boxes or by looking at the schedule of trains and know for certain that this car belongs in this particular train.

Posted by Mike McNamara at 2:19 PM No comments: 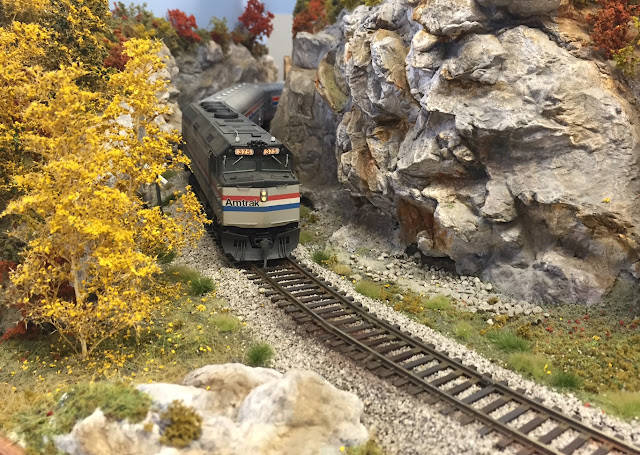 Posted by Mike McNamara at 9:49 AM No comments: