Track in at Crawford Notch

With wiring tasks done for right now, I am turning my attention to getting sidings and passing tracks installed off of the Maine Central main line. First up was the small yard at Crawfords Notch. I pretty much followed the prototype by having a 3 track double ended yard. Operationally I will use this small yard to receive gravel cars from the LVRC that the MEC would use for ballast along the Mountain Division. These could be dropped by YR-1, but more likely I will have these delivered by a ballast extra, returning with empties back to Hardwick gravel on the LVRC.

I installed Walthers #5 turnouts and Atlas code 83 track here, but used a piece of Micro Engineering code 55 flex track for the far #3 track. Pictures show this track as being pretty light and somewhat overgrown in 1980 as it was not used too much I suppose.

After getting the track in and feeders wired in (aaahh, more wiring!), I ran a local MEC train through the tracks to see how they worked. Next I stalled Details West tie plates and turnout brace castings on the rails facing the layout edge. This is the first scene visitors will encounter when entering the layout room, so I want to make it look as good as possible. However I used up all that parts I had, so I need to get some more to finish up here. Also, the castings are too big for the code 55 track, but I might be able to install them and then file down what extends above the rail. We’ll see. 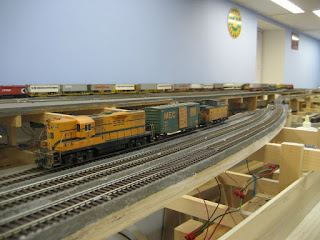 For turnout controls, I went with hand operated throws as this is right along the layout’s edge. I decided to give the Caboose Industries high level switch stands a try. I am not sure yet if I like these. They do look a little better than the standard ones in use on most layouts. But they are a bit delicate and I am not sure how they will hold up over time. I actually broke one by throwing it back and forth too much while getting the alignment right. We’ll see how it goes. I do like being able to add the target to the pivoting rod. That is neat. 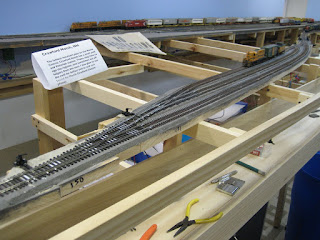 I also plan to use this yard in a somewhat freelanced way by having a local out of St. Johnsbury travel to the yard, pick up any cars for North Stratford dropped by RY-2 and then run around the train to head back up the line towards Whitefield, taking the switch to North Stratford. This will then travel to a section on a shelf above Groveton to interchange cars with the North Stratford. I’ll post more on this later when I build that small section. It will make a nice model railroad operational job, although it is not prototypically accurate.
Next up will be adding the interchange tracks in Whitefield between the B&M and MEC, getting the B&M mainline track in place, descending downhill, under the MEC line and into a hidden section that turns back and heads to Groveton. Here is a look at the Micro Engineering bridge on the MEC and the B&M roadbed underneath. I attached Chooch abutments here although I need a small stone block to reach the bridge footings. 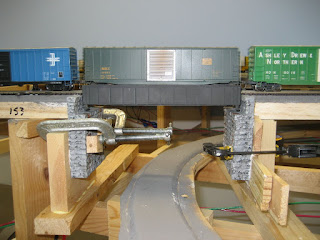 It Ain’t Fun, But It Has To Be Done

Wiring of course. I don’t know too many people who enjoy it. I don’t mind too much as I like the results you get, being able to run the trains or operate turnouts, etc. But it is tough to get under the layout and reach areas for soldering, work on wires in tight spaces, etc. Luckily it is something that you do and get out of the way, and if done well, you do not need to revisit it too often!

A lot of time recently has been spent getting the wiring done on the third phase section. All feeders have been put in on the staging tracks and the Maine Central main line. Next up was the installation of Tortoise switch machines for all remote turnouts, in staging and also on the main where it is not close to the front of the layout. In all, I installed 15 Tortoise machines and wired them into Digitrax DS44 stationary decoders in the last couple of weeks. My knees are telling me “Enough!” with crawling around, getting up and down and sitting in awkward positions to get the Tortoise alignments correct. I still have at least 4 more Tortoise’s to install, although these are in places where the turnouts are not yet installed (the B&M line leading into Whitefield and the MEC switching at East St. Johnsbury for Maple Grove Farms and Ciment . So, I’ll work on getting the trackwork done in these locations and give my knees a break for a while. One good thing is that these installations are not too hard to reach from the front of the layout, so they will be easier to do than say the staging yard machines. Here is a look at the work done at the Rigby () end of hidden staging, showing the Tortoise machines, various feeders and bus wires, plus the DS44 decoder. 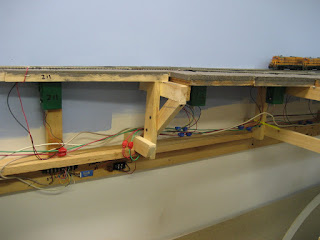 Another wiring task I took on prior to the Tortoise blitz was installing a remote Short Circuit panel. This feeds off of the PSX circuit breakers that split the layout into separate power districts. As I could not determine a good local location for each short circuit indicator LED ( I do not have local control panels), I decided to centralize them and install them above the backdrop in the central peninsula. This makes them visible from about 80% of the layout. I might still run another local LED over to the paper mill sections as they are visually behind this indicator board. But this is better than walking over to the DCC shelf to look for the warning LED on the circuit board. I built the panel out of styrene, making a small box. I ran the wires as a bus from the circuit boards and used regular LEDS from Radio Shack in plastic mounts. I printed the background on my computer using a drawing program and setting the background to black with white text. Here is a look at the panel: 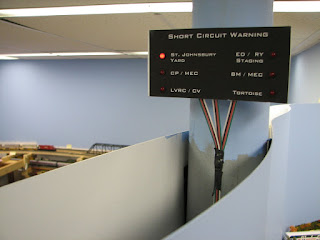 I plan to build some more panels like this to show turnout positions as well as track occupancy lights for some of the hidden tracks on the layout. I picked up a few IR detectors from Boulder Creek Engineering to install on the hidden staging tracks. When that is in place, I’ll post an entry on that letting you know how it turned out.

It has been a little while since I posted an update on the layout, so here comes a few updates on the layout in a couple of postings.

Work on phase 3 has been progressing nicely since I started construction back in August. I have all of the benchwork and mainline track in place prior to the open houses in November, so I was able to run the trains on this section. This was also the debut of the U18Bs and they performed quite well (operationally and sound wise). I’ll give an update in a lnear fashion, moving from the existing layout area starting at Gilman and finishing up at the other end of the room. 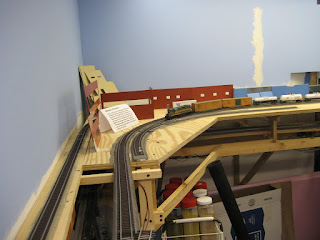 Putting the trackwork into this latest phase solidified some things that were up in the air and opened up some new possibilities. First, I removed the MEC Connecticut River bridge crossing. It is nice to see a train roll through a bridge, but it just felt too cramped and forced right next to the paper mill at Gilman. It also created a difficult scenery situation. So now I extended the track out of Gilman into the area where the bridge was, which gave me a nice sized passing siding and a realignment of the mainline through a broader curve. I still have to get in there and finalize the actual track sidings and of course get some of the paper mill building built. But Like this arrangement better. Hiding the hidden CP track behind the mill is also easier now as it will just be behind trees. To the right is a look at the revised Gilman area.

The MEC line after Gilman will parallel the CP line and head behind a new foreground scene that has been opened up. Before, I planned to have Whitefield in the 2x 8 area across from Gilman, but it was just too hard to fit the track in correctly. So I moved Whitefield further down the benchwork on phase 3 and created a new area as a destination for B&M local trains, the Groveton paper mill. This will provide a good switching location for an operator and give some purpose to the B&M trains crossing and interchanging with the MEC at Whitefield. 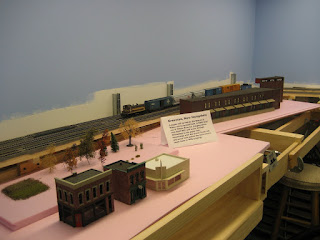 In the picture you will see the 3 tracks along the wall. The far track is the CP mainline into staging (having come out of St. Johnsbury’s south end) and the near track is the MEC main. In between is the staging track for the B&M, representing the south end (i.e. White River Jct.) From this staging track the B&M train will come “on-line” to the layout entering Whitefield. It will then travel and turn back on itself, descending as it does (more on this later). It will end up here on the pink foam which will be the Groveton paper mill. I will also incorporate an interchange track with the Grand Trunk as another car destination (and I could make it an operational interchange if I want to add some GT engines to the layout!). 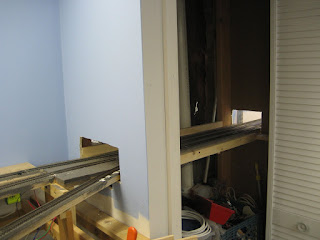 After Groveton, the tracks pass through the utility closet to the rest of the phase 3 section. The B&M track into Groveton will pass in front of the doors on a shelf or drop leaf. In the picture the MEC track curves towards the front as it approaches Whitefield. The B&M track is in the middle, also heading to Whitefield. The far track is the CP heading to the staging yard.

Here is an overall look at the bulk of the phase 3 section built since last August. The front track near the edge of the layout is the MEC. The B&M track/roadbed is seen heading diagonally towards the diamond crossing and then along the front of the layout edge, descending to a turn back curve and then reappearing under the staging yard and the MEC track (the spline and Homa-Bed is the B&M). In the back is the double ended staging yard to handle CP and MEC trains at each end. There are 6 tracks in total and this, along with their length will fully support all the trains I will operate. The staging yard will be hidden by a short backdrop, allowing someone to peer over it to see the yard, but visually separating it from the foreground scenes. The sidings and interchange tracks at Whitefield still need to be added and are next up on the work list. At the far end is Crawford Notch and the curve that leads into the other end of staging, representing . (Pictures and info on that end will come in another post) 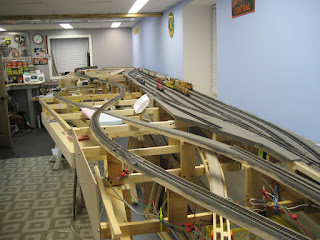 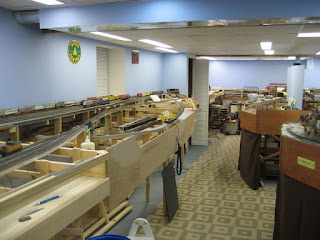 I’ll close out this post with 2 more views of the new area. The first is a look in the reverse direction, back towards where the above photo was taken. Here you can see the existing layout sections to the right, and Crawford Notch is directly on the left. The throttle is sitting atop the B&M line. 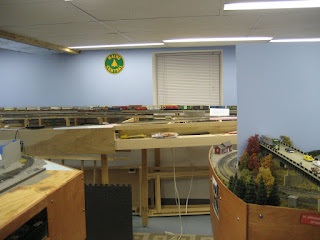 And finally a look at the new section from the existing layout area where St. Johnsbury is located. In this view you are looking directly at Whitefield. The freight cars in the background are in staging will get hidden by the short backdrop coming later.
Posted by Mike McNamara at 11:19 AM 1 comment: