On one of our vacations to New Hampshire, this time in 1999, we took a drive up into the north country of the state. This fairly remote area has just a few roads and a couple rail lines, and not too many people or houses. By this time, the former MEC and B&M lines in this area above Whitefield were being operated by the New Hampshire & Vermont Railroad. This track was in OK condition, but showed the effects of less traffic and even less maintenance.

However once above Groveton, as route 3 curves and twists northward paralleling the right of way, you eventually get to North Stratford, and see some real signs of active railroad life,

Here the former Grand Trunk line was now the main line of the St. Lawrence & Atlantic. The track is in great condition, and there is plenty to take in. However, as usual, I am not there at the right time to see actual trains in action. No problem though, still plenty of interesting things to observe. 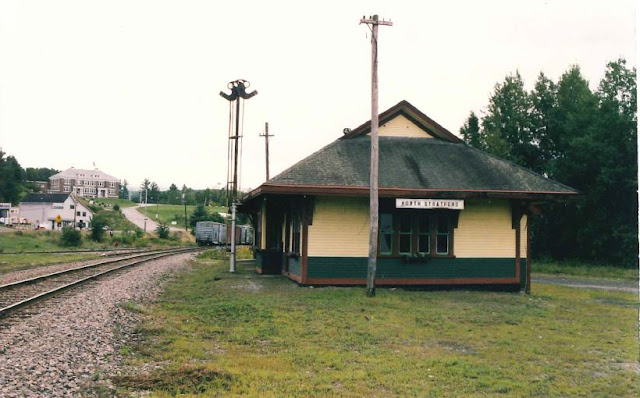 The station and track are in excellent shape as seen here. The old semaphore is no longer used, but it is cool to still see it in place.North Stratford served as a junction point between the Maine Central and grand Trunk years ago, although not too much traffic was interchanged here, as the GT continues south to Portland Maine to do most of the interchange with the MEC there.

But this is the point where the Maine Central continued north along the Connecticut River to get to Beecher Falls Vermont and the still very active Ethan Allen furniture factory. On this day the line north is state owned and operated by the New Hampshire Central. Before that this line was operated by the North Stratford Railway, who took over from the MEC after the state bought the line. More info about that can be read here on my nekrailroad.com site.

But back to North Stratford. A string of boxcars on the siding is of interest. First, some interesting older paint schemes, some with new stenciled owners, others with signs of years of use.


The New Hampshire Central did not have a lot of local customers, but in the 1990s htey constructed a railcar repair facility. This provided plenty of traffic for the shortline, to take cars in for various repairs, and then return to the St.L & A for active service on the nation's rail network. You can read more about the repair facility in an article I wrote for the NER coupler, click here (be sure to click through to the original page as I may not have updated the new page by the time you read this).

The St. Lawrence & Atlantic was previously the Grand Trunk, which was very much a child of parent Canadian National. On other trips, it was easy to find plenty of CN equipment, and even CN locomotives on the trains operating on this line, even after the StL&A took over in 1993. One time I found a train with a good number of Central Vermont GP9s in Green and Yellow operating a train through Berlin NH.

Another look at the North Stratford area reveals that there was once a bit more activity here, back in the Maine Central and Grand Trunk days. A small yard facilitated more interchange, but most of those tracks are now removed.


A trip to New Hampshire in 2017 revealed not too many changes to North Stratford. The StL&A is now part of the Genesee & Wyoming system, and the ex-MEC Beecher Falls line is still active. The rail car repair facility has been converted to a propane transload, and the line beyond the facility has a stock pile of older cars not currently in service, probably earning some money for the storage service provided.

I'll soon be laying some track on my layout for the North Stratford area. This will be mostly about facilitating some additional operations for the MEC, adding a passing siding, a spur or two, and the line over to Beecher Falls (greatly condensed) for the North Stratford Railway to service a scled-down version of the Ethan Allen furniture plant. This is all up on my shelf area that was added in a moment of inspiration after I thought I had completed the basic layout footprint. I will be digging through my prototype books and articles to draw out some ideas and inspiration for this small area of the layout. 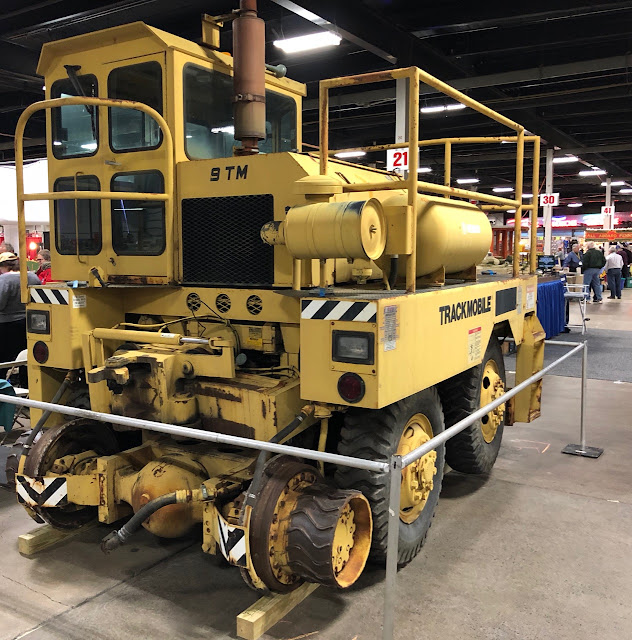 Posted by Mike McNamara at 10:53 AM No comments: