Well, with some things behind me like the NMRA national, vacations and other summer stuff, I am getting back to working on the layout. Actually it has been a while since I have done any real layout construction. I kind of finished most benchwork and trackwork I needed to get in prior to the Philly national convention in 2006, and since then I have spent time focused on scenery, detailing, locos and freight cars since then. But the time has come to start getting the rest of the layout built with permanent benchwork and track replacing the temporary return loop I put in for the convention and open houses.
First task was taking apart the temporary benchwork and moving everything out of the way in order to have a clear area to work in. This means a few things had to move into the other layout area creating a (temporary) mess. This part was hard because I really enjoy the finished area, looking at the layout and running trains. But this will be just for a short while. 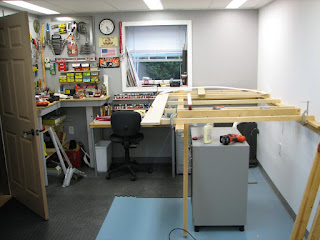 With the area cleared out I started building the permanent benchwork. I actually started at the far end near the workbench and the window because this is the spot I needed to have the Maine Central turn back to head into staging. So I worked with the curve I wanted to figure out how far out to bring the benchwork and still leave room for the workbench. Drawing on paper or the computer is one thing, but seeing some wood and and track in place really helps you make sure you are on the right path. 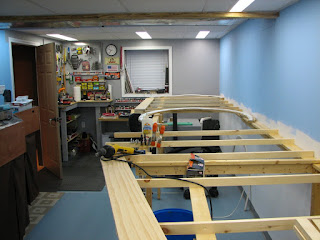 The benchwork moved along pretty quickly and I realized I should probably paint the walls the sky blue color, even though I may have backdrops brought forward in some areas. It would have been easier to do before the benchwork went in, but it wasn't too hard with only the basic L-girders and cross sections in place. 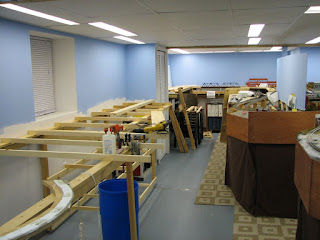 I built a section under the layout to store my Free-mo modules. Had I planned the modules before the layout was started I could have come up with a way to incorporate them perhaps. So they will only be for module events and can be worked on in the aisle or in the garage. 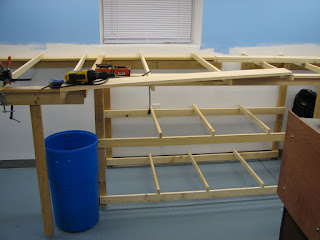 So work will continue, but I do have a deadline coming up. the layout will be open in November for the annual layout tour throughout NJ, PA, DE and MD. Check out modelrailroadopenhouse.com for a full list. I will be open on the 8th and the 14th this year.
Posted by Mike McNamara at 10:25 PM 1 comment: