Been busy most of the summer with other activities, but in August I was able to get back to working on the layout. After some initial clean up of the area, I looked around and tried to determine what I should focus on. There are plenty of things to do, but I am committed now to getting in all of the remaining trackage on the layout in order to host an initial operating get together. Not a formal session, but just something to introduce my layout to some local operators and run through the train schedule to see how things play out. I have a full operating plan on paper and in my mind, so I would like to see if it will really all come together as planned. (I imagine adjustments will be made).

First up was to tackle a staging deficiency I identified after I started to revise some of my Canadian Pacific train operations. Originally I built Newport staging with 3 separate tracks. But with the addition of an Amtrak train to 2 CP locals and 1 through freight meant I would have trouble staging 4 trains. I could see a (somewhat) easy remedy by adding a new track, but it meant working in a tough location under benchwork for Gilman, VT above. Over the course of 3 nights I fit in subroadbed, Homabed and track, cutting in a new turnout and adding a new Tortoise switch machine. It was not easy to work here and I would recommend building hidden staging completely before adding stuff above it! Now I have space to stage either the Amtrak train or one of the CP locals, and the other 3 tracks for the remaining trains. 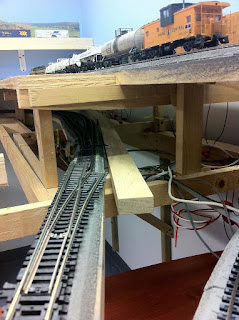 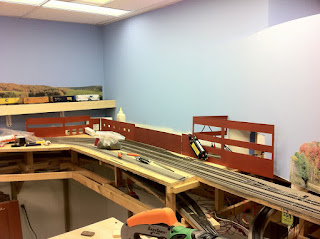 With that out of the way, I turned my attention to the area above, figuring out the track layout and building arrangement for the paper mill in Gilman. Using some prototype information about the real Gilman mill sent to me from fellow MEC modeler Cam Green, I determined that long sidings can be used to handle multiple car types at different spots. I know of this concept but sometimes you just get hung up on one siding having to be for one purpose and used to hold all the cars for that purpose.

So I have one long siding that will handle inbound pulp paper boxcars and also kaolin tank cars. And further up a siding that splits off will hold outbound paper loads, with extras on the main siding. This overcame an obstacle I had trying to fit in multiple turnouts. With less turnouts, I have more track to spot cars. I also have another siding to handle covered hoppers of starch and hoppers of coal. These 3 sidings along with one long passing siding (which will also hold cars off spot for a local to spot later) seem like not too many tracks but actually serve all the needs of the mill and actually follow the prototype fairly well. Here are two overhead kind of shots with the building pieces mocked up and some cars spotted in appropriate places. 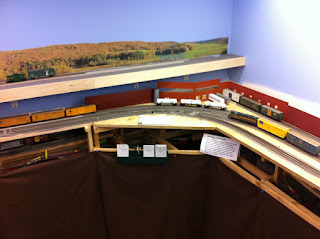 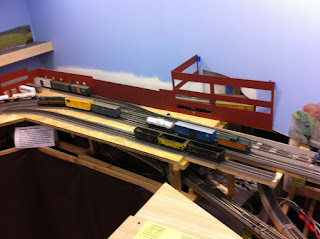 Then I moved over to East St. Johnsbury where I put in 3 sidings. Two long sidings will handle Maple Grove Farm food products and Ciment Quebec (cement) and another will be used for a pulpwood loading siding. I removed the temporary trackage and put in the three turnouts and fit in new sections of code 83 track between them. I also added under track uncoupling magnets on each track. Next up will be adding Tortoise machines to the 2 turnouts out of reach and a ground throw on the other that is easily reached. Here is an in progress photo. The kaolin cars were just used to test the track and do not represent cars that would be spotted here. 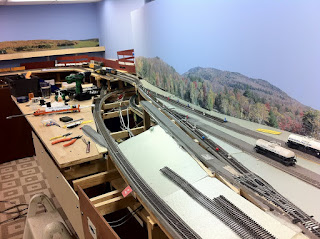 So progress has been made. I need to next tackle the final track in Sheldon Jct., which I have not touched since putting in track about 5 years ago. I have also started to lay out the track in Morrisville for the yard, engine house and assorted industries. This I may do next because it is pretty much finalized. I also have the track for the talc mill in Johnson, some B&M track in Whitefield, the B&M track in Groveton for the other paper mill and the track up on the North Stratford shelf. Hopefully I can keep at it and meet my goal of hosting an operating night sometime this winter.
Posted by Mike McNamara at 10:39 PM 4 comments: