Sorry for the lack of posting here. It is not due to inactivity on the layout or model railroading in general. I just find it much easier to throw out an update on my Facebook layout page, than to take the time to post here. I will admit that this blog is a little easier to search and write longer form, but it definitely requires setting aside a segment of time to prepare and upload pictures, and then do the writing. So probably will not be as much here regularly, but I will try to post now and again.

Recent work has been on getting North Stratford started. Until recently it has been a shelf only, good for storage and initiating/terminating the MEC TY/YT trains to St. Johnsbury and back. I have now gotten all the track in place and run to Beecher Falls and the Ethan Allen plant to be serviced by the North Stratford Railway (using a little license here on the timeframe of when MEC operated to N. Stratford and when NSRC was in operation). 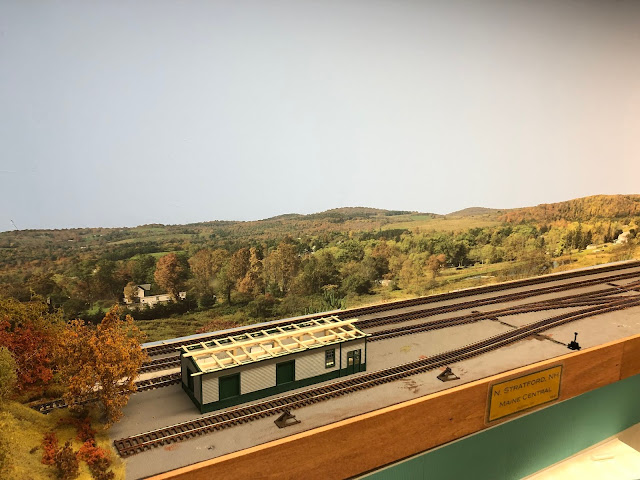 ABOVE: The start of North Stratford comes through the wall of the closet on the elevated shelf above Groveton. I added some scenery to disguise this opening. I have also been working on a Sheepscot kit, acquired in early 1990s, for a Maine Central freight house. Here I am checking the placement. I have since moved the spur in front to make more space for the loading dock (not built yet).Behind the depot is the MEC main line, and behind that are the Grand Trunk tracks. 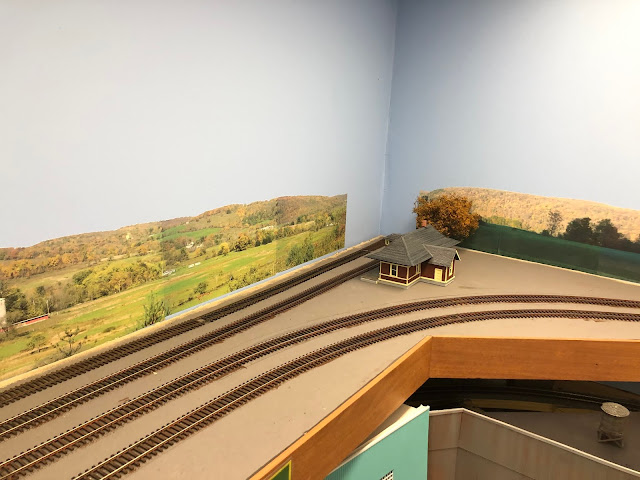 ABOVE: The corner of the shelf section, I have the station I built earlier this year in place to represent the Grand Trunk's North Stratford station. The 2 tracks here represent the GT. The one closest to the wall will be non operational. I plan to stage freight cars there to help hide the transition to the photo backdrop. The very corner itself will get disguised with some trees. The closer track is operational and will be used as the interchange between MEC and GT.

The 2 tracks in front of the depot represent the MEC Line up to Beecher Falls and a passing siding. 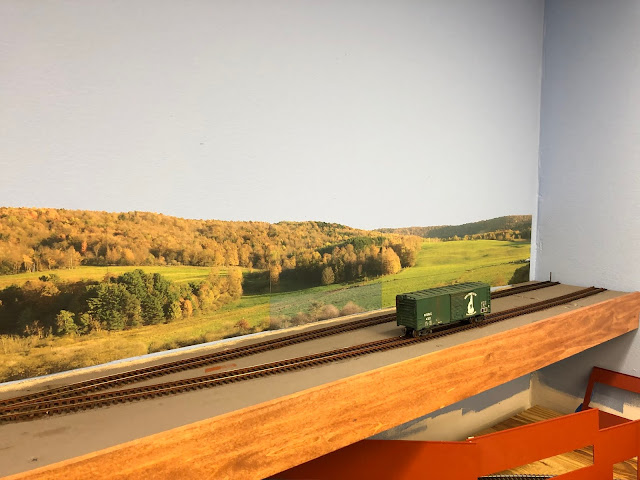 ABOVE: The end of the shelf will terminate with 2 tracks serving the Ethan Allen Furniture plant. The rear track will be inside the factory (a shallow building flat) while the front track will be for overflow car storage. The NSRC will need to switch cars for the plant, pulling loads out of the building and spotting empty 40' boxcars inside. The loaded cars will then need to be delivered to the GT/MEC interchange.  A true short line operation! Below is part of the paper mill building mock up for Gilman VT, served by the MEC.

As of right now, all track is in place, wired and painted and weathered. I did test runs and applied CRC 2-26. The turnouts (6 total) have ground throws installed, pulled out to the front edge. I also installed magnetic uncoupling ramps to make things easier on the operators. The height makes them hard to see from a scenic perspective, and should reduce needing to reach in to manually uncouple. I tried to strategically place the magnets so they can serve multiple purposes using delayed uncoupling.

I need to update my paperwork for the NSRC train (which has never run yet) and the MEC TY-2 train, which will need to assemble its cars into a train instead of just pulling out from what was essentially a staging track.

ABOVE: Overview of the corner of the layout, with the paper mill in Groveton NH seen below, and North Stratford NH above. To the right is Beecher Falls. I had to pull out all the buildings in Groveton to do the wiring above. Really, it makes sense to do the upper levels first before the lower levels, but alls well in the end!

I'll probably hold off on any scenery until I get another Op session in and run up top to see how things go. But it won't take much really to get scenery in most areas. It will just be dirt and static grass mainly. There will be a need for trees near the station and out to the Ethan Allen plant. And then the plant structure itself. We'll see how that goes as I do need a number of trees in other parts of the layout to get them looking more finished.
Posted by Mike McNamara at 2:24 PM No comments: