Getting ready for Ops

I have been busy with lots of things, including model railroading, but I have not been good about updating this blog unfortunately. Since the last posting I did attend the Springfield train show with my Free-mo module, participated in a couple Op Sessions, worked on the web site for the MER Fall 2015 Convention (DelawareValleyTurn.org), changed jobs(!), and spent some time getting the layout ready for an initial Op session.

The Springfield show was a blast and New England Free-mo does such a great job organizing the layout. My model railroading buddy Anton and I headed up Friday and spent some time railfanning at the Springfield station, catching some Amtrak trains and a CSX auto rack.


Then we headed over to the Expo center to set up the modules. The layout was already coming together and my Woodstown Jct. modules were added to the start of the branch line segment. In just about 2 hours we were all done and heading out for dinner. The next day started off with snow that started over night. We got the layout running, had an Op Session at 1pm, met lots of great folks and did a little shopping. No doubt the snow kept many people a way as attendance was unusually light. This made it easier to quickly walk around and then get back to the layout though.


The Op Sessions I attended back home were part of a long running monthly session at my friend John Rahenkamp's CL&W layout. This is a really big layout and has about 15 or more people needed to run the 4 hour session. For more info and some recent pics, check out this page from the railroad-line forum:

On the home layout, I want to get Ops going this month, and I am also on the schedule for the Ops Callboard of the MER Fall convention in nearby Mt. Laurel. I have been busy preparing and staging freight cars, double checking waybills, testing locomotives and doing some speed matching, and most importantly developing a master schedule. This has been time consuming, but enjoyable. I have always had a plan in mind for operations, but pulling it together into a what I hope will be a workable and enjoyable schedule has been pretty fun. I have test run a few of the trains as well and posted some photos of that on a newly started thread on the railroad-line forum:

In getting ready, I had to make some decisions on what to finish now and what to leave be in order to get sessions started. A good example is the track in North Stratford. This area has never progressed past the benchwork stage, but I really wanted to include at least the MEC YT-1/TY-2 train as that interchanges with St. Johnsbury and affects cars in other trains. So what I decided was to just temporarily lay some flex track to hold an already staged TY-2.

The job will be more fun once some more track is in place in North Stratford, but for now it will still be a nice little job. One thing that is kind of cool is the need to run around the train in Crawfords in order to reverse direction and head to St. J. I ran the train to try this out and it works well. Here is a pic of the locos after running around the train, pulling the caboose off, and then going back to get the train cars to reassemble onto the caboose.


I did finally get a master schedule done, although I still have to work out a few loco assignments. I also have to finish staging a few trains, like the CV ones. Almost there though! 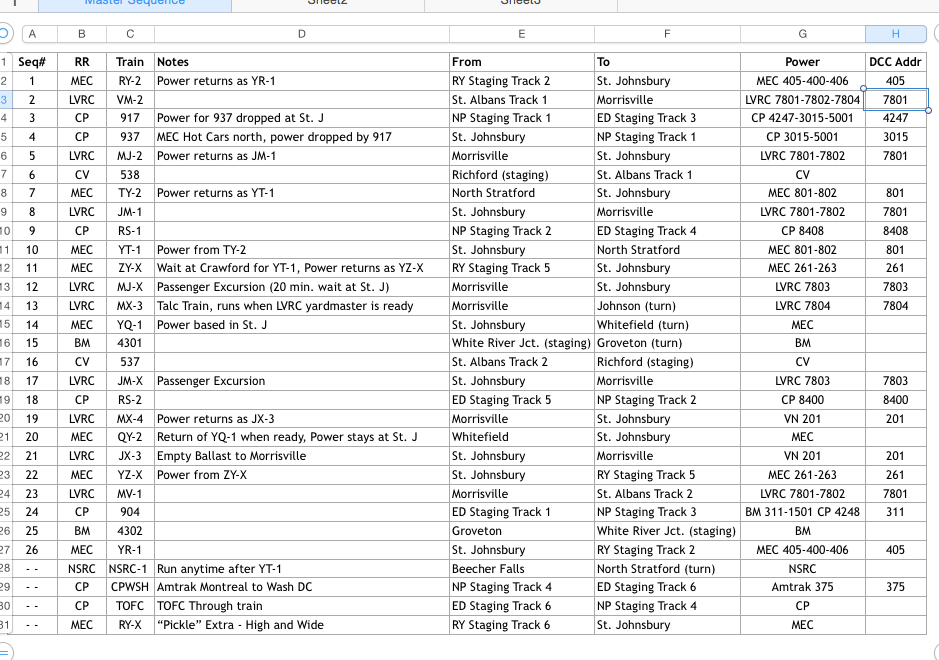 This will at least be a starting point for the first session. We'll see how far we get and what does and does not work. Now to finish up a few more things, and put a date in the calendar to get trains rolling.

I still want to do some modeling though, so I have been doing a little weathering and flat finish on some of the locomotives that will be on duty. Here are a few getting their windows masked prior to the weathering. One of the newest additions is the B&M Bicentennial unit, #200. Pretty cool paint scheme. Probably didn't venture up the Conn River main line often, if at all, but I could't resist this loco! 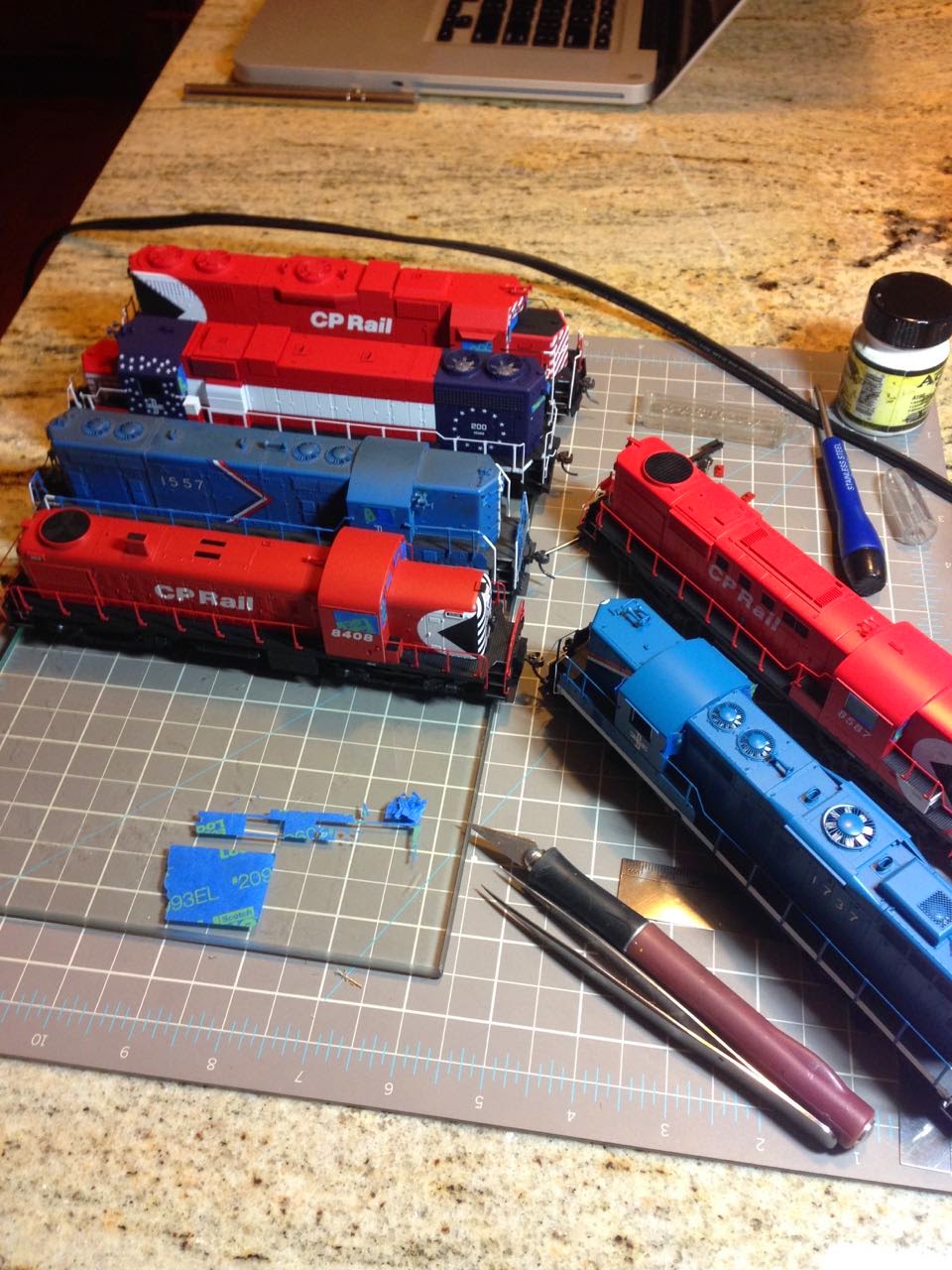