Well, here it is the middle of August and all is quiet on the model railroad front. The long road to get as much done as possible on the layout before the Philadelphia National convention is now over. I knew about the convention before we moved in to our house and before the layout was started, so this was always a goal and a driving force to keep me motivated. There were also a couple of local open houses to keep me going as well. But now the convention is over and I must say I have taken a break from things the past few weeks.

First a recap: I had my layout open for 2 tours on the convention as well as one other night where I had some friends visit. (If you want more info on my layout, be sure to visit my website for the layout at http://mywebpages.comcast.net/mikemcnh/mrr.html) 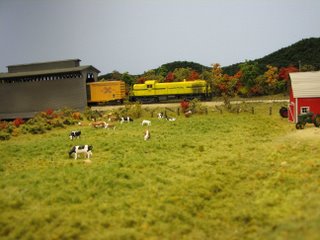 The focus up to that point was to have the 2 independent mainlines in place so 2 trains could run unattended. That accomplished I focused on the scenery on what I termed the first phase. I wanted to get more done, but I think I got enough in to convey what the layout will look like, Fall in 1980 in upper Vermont and New Hampshire. I completed the farm scene at the right to help convey the feel of Vermont. I also comlpeted the majority of the scenery in St. Johnsbury plus I had the scenery in Sheldon Jct. completed last November. I put sound into a few more locomotives, completed a second Lamoille Valley RS-3 and weatherd a lot a freight cars. This work really paid off because many of the visitors commented positively on the weathering and the scenery, so this was quite satisfying.

The convention itself started for me Sunday evening working in the Silent Auction room, which was being run by the New Jersey Division MER-NMRA (go to the web site at: http://mywebpages.comcast.net/njdivnmra/). 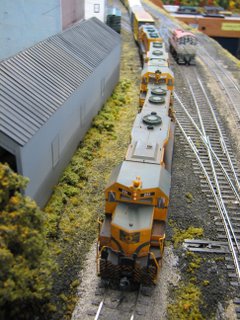 I also spent all day Monday there. (Tuesday was the 4th of July and I was of with the family). My first tour was Wednesday night and I spent all of that day making final preparations. Around 8:30pm the bus pulled up and about 20 people from all over the country descended on the basement. The trains ran without incident, everyone took pictures and had a good time, and I was happy that all went well. Whew! Thursday was back to the Auction room, then back home for the private layout visit. Friday I went to the opening of the train show, was floored by the Intermountain pre-production sample of an HO GE U18B locomotive, and purchased more stuff for the layout, of course. Friday night was the second tour and again all went well for the 20 visitors. I only wish I had time to take in some clinics, but sometimes you just have to be a volunteer!

So since then, I have not done too much. I have really enjoyed wathching the trains run through the new scenery and listening to the sound equipped units. But I think things will be picking 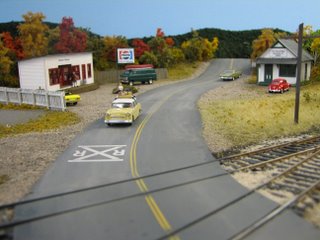 up soon. At the train show, I picked up a crossing flasher circuit and I really want to get that installed now that I have a highway grade crossing in place (here at Hardwick, VT). I also just received in the mail my Digitrax sound decoder for the Kato F40PH. This is supposed to be an easy install and then I can try out my Amtrak train (a bit of proto-freelancing to have an Amtrak train travel through St. Johnsbury - I'll have to post my thoughts on that in the future). So I am starting to feel like doing some things now that the burn out is wearing off. The good thing now I suppose is that I don;t have to feel to much pressure of an approaching deadline. I can do some projects I enjoy and still run the trains around for my own enjoyment.

Of course, there is the local November model railroad self-guided tour. I could put my layout on that tour I suppose, just to help keep things moving. Maybe I can get that corn field in place and that rough scenery in Lyndonville, VT completed. And perhaps I can get the paper mill at Gilman, VT started. Hmmm....
Posted by Mike McNamara at 1:58 PM 2 comments: