The two open houses in November went well. A little busier on the Saturday, but still a good turnout both days. Not everyone signs in, and some groups only have one person sign in, so it was tough to get an accurate count, but I had about 50 people on Saturday and about 35 the following Sunday.

This year I had a helper on the Saturday open house, Ken K. from up in New York. Ken has a similar modeling interest and had visited my layout last Spring. Ken plans to model the D&H in the same basic time period as my layout. Ken was looking for another visit as he is planning and working on his layout, and I jumped at the chance to have another operator on hand during the open house. Usually I get busy answering questions and socializing and it helps to have someone else running some extra trains (in addition to the 2 running on loops) and keep an overall eye on things. It also gave me a chance to run some trains with Ken when things were not too busy.

Another benefit was that Ken took a few pictures during the day, something I almost never get a chance to do. I always want to get pictures of visitors, but once the conversations get going, I totally forget to snap a few pics. And never any pics of me eitherSo thanks Ken for these photos!! 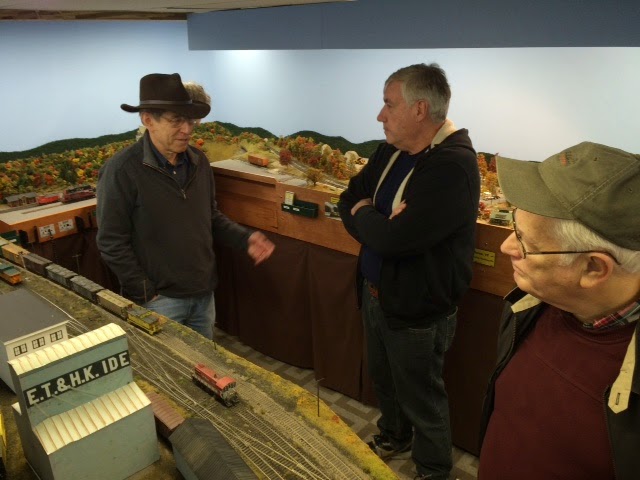 Posted by Mike McNamara at 11:16 AM No comments: