I'm back from the big Springfield show, and as usual, it was a great time. I did not hear anything about attendance, but it seemed very crowded both days. It was great to see so many familiar faces and talk to those I see maybe once a year. It was also great to meet and talk to those of you who read the blog and enjoy it. I'm glad you are out there following along!

Here are some assorted pictures and commentary from the weekend.

Looking forward to next year!
Posted by Mike McNamara at 3:44 PM No comments:

A quick update on some things I have been working on. But also, this weekend, the big train show up in Springfield, Massachusetts will be happening, and I'll be on hand again with my Woodstown Junction Free-mo modules, setting up a big layout with the New England Free-mo guys. Hope to see you there!

I was able to get the 2 new turnouts situated in Morrisville in order to add the new run around. Of course one of them had the points centered directly under a subroadbed support, but luckily it was as simple as removing a couple screws to get the support out off the way. I'm glad I followed hat advice about drilling up into the subroadbed from below instead of down from above. A few pieces of track reconnected everything, and a few new feeders, and I was able to successfully test it out running a train back and forth. No Tortoise machines yet - that will have to wait until after the Springfield weekend.

A while back, over on Trevor Marshall's Port Rowan blog, Trevor wrote about rebuilding his workshop and using some Ikea furniture to build things out. I have used a few different Ikea products, including my workbench and chair, a couple of racks for paint bottles, as well as a metal cabinet that stores lots of supplies. Trevor made mention of an Ike drawer system called "Alex" and how someone he knows uses it for extra car storage (Trevor went with some different cabinet choices). I've started to suffer from having completed and in progress cars and locos in various places around the layout room, so I decided to investigate this as a solution. It turns out to be a great solution, and I was lucky enough to get an after holiday 15% off sale price too. These would work well for lots of different things, like styrene sheet and strip stock, but I'm glad to have the one just for my various rolling stock and locos.


One of the drawbacks of the way my staging yard came out is the limited visibility for operators to see their trains when they enter or exit the yard. It is not overly complicated or a long distance to travel, but almost all operators prefer to visually see their train at all times if possible.

I've often thought a mirror would help operators get a visual on their train, just to see that they are moving and at what speed. Turns out we had another Ikea item in storage, purchased many years ago, a simple 9 inch square mirror. I played around with one to see if it would work. What I like is that it is not a giant mirror but just enough to see the yard ladder when you stand in the right place. I think the operators will appreciate this addition.


I've been slowly progressing on the ET & HK Ide building. I completed adding the embossed paper to represent the metal panels, and completed the loading dock, overhang, and windows and doors. Up top the windows are covered over. In front of them will be the unloading chutes up to the conveyor. Two holes in the roof were added so these can pass through. Still plenty more to do, but getting there.

One final project, I installed a Soundtraxx SoundCar into a BAR boxcar. I really wanted to get this done before Springfield so I could take it up there to try it out.

Initial playing around was pretty neat. The consist via magnet works great. I adjusted a few volume settings, so I look forward to running this on trains through Woodstown Junction and out on the big Free-mo mainline this weekend.

I wrapped up the majority of the work on my 1970s version of Maine Central EMD GP7 #564. This unit was painted in a simplified green scheme used on a few locomotives starting in the late 1960s. It contrasts nicely with the harvest gold units that comprised the bulk of the MEC locomotive fleet of the day.


My model uses an Atlas GP7. I actually painted and decaled it (Microscale) a few years ago, but it has sat waiting for completion as other projects took priority. I found a need to get another MEC loco on the layout, so I pulled this unit out for finishing.

Added details include the front hood mount bell, the side mounted air horn and a winterization hatch. There are a few other details I can add, including a speed recorder and the correct MU stands, bt not having these on hand, they will have to wait.

The Microscale set is not the best representation of this paint scheme however, as it is a little too yellowish, and it also lacks the ring around the Pine Tree herald.

However, not all was good unfortunately. I previously posted a picture of this unit showing the iPhone 4 speaker situated above the Tsunami decoder. The sound is great and after a little programming and adjusting the EQ, it sounds really nice.

That is until it stops making sound, or starts playing random horn sounds. Seems something is not right with the decoder. I tried a factory reset, and get the same results. It runs fine for a while, but sooner or later the sound cuts out, or the whole decoder cuts out and the loco stops. It is possible I damaged something doing the install, although this would be the first bad install after a couple dozen.

So it seems the remedy will be to carefully pop the shell back off and replace the decoder. It is ashame as I had it nicely speed matched with the Atlas factory-painted Harvest Gold GP7 565 shown above. As this was the last of the sound decoders I had on hand, the question now will be whether to go to Tsunami 2, to LokSound, as I would like to give them a try. Guess I'll have something to pick up next weekend at the Springfield show! 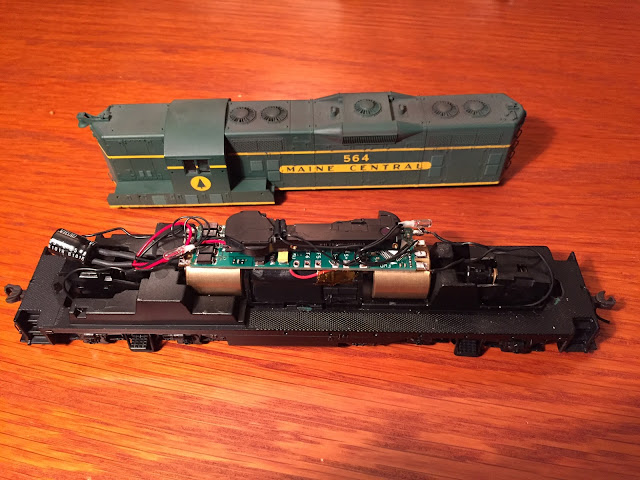 As I mentioned in an earlier post, I am adding a turnout in Morrisville at the suggestion of my operating crew. It will provide a second (and longer) runaround/passing track, as well as give access to the south side of the mainline from the eastern approach. In watching operations and trying some moves my self, I agreed the suggestion had merit.

My main concern with making this change though was how long would this take to get completed, and how long until I could schedule the next Op Session? One thing was certain though, nothing would get done unless I actually started the work!

With the required curved turnout in hand, I found I had a little time to get started with this the other night. I knew I would not finish this up in one session, but it seemed best to get started and chip away at the overall work.

I cut the rail with a Dremel tool, then pulled up the flex track. I cleaned up the surface of the Homasote roadbed. As there was no good subroadbed under the area that the new turnout would lead to, I cut out a section of scenery. This was only a piece of foam with some scenic material on top, so it wasn't too tough to remove.

Using a scrap of 3/4" plywood, I traced out a subroadbed piece using the newly opened up hole. I clamped a support up from the cross piece below, and then leveled out the new piece. On the yard side, I had a small piece of support for the existing roadbed to tie into.

This took about 1 hour to get done, but was a crucial first step. Next time I can drop in the Homa-bed and get the turnout locations situated. Holes will be drilled for the Tortoise switch machines and I can cut new flex track pieces to tie it all together. After soldering the rail in and adding the track power feeder wires, I'll have done enough to support testing trains and restoring operations. This will be without turnout controls of course. Another session to get the Tortoise machines installed, wired and a control throw installed, and I'll be ready to schedule the next Op session. I wait until after a trial run with the next Op Session before starting repairs to the scenery.

I think the takeaway form this is to break down work that might seem daunting and time consuming into smaller sub projects that can be accomplished in smaller segments of time. It was unlikely I would find the multiple consecutive hours do this work completely in one shot. But tackling it in 3-4 sessions was very do-able.

Posted by Mike McNamara at 2:52 PM No comments:

Happy New Year! Thanks to all those who take the time to check out my blog and see the latest on my layout. I enjoy putting information and pictures up here, and I hope it is useful and entertaining for most!

A week ago I used my iPhone to capture a few video clips of train action in Groveton NH. It doesn't encompass the full scope of operations that train 4301 performs, but I thought it would be neat to see some of the action up close as well as see the overall area and how it has progressed to date. I think it turned out to be a neat little operation within the overall scope of the layout.

While heading up to Boston on the Acela, I had fun editing the video and also adding some audio over top the video action. Using some audio clips from various sources as well as some of my own railfan video, I merged together a finished video which I think is more fun than just plain video. The Kato RS2, custom painted for BM #1501, does not have sound of its own at this point.

The video is up on YouTube, and you can view it below. If for some reason you can't see or play it, here is a direct link: https://youtu.be/MOeA7pdvf3Q

I would suggest viewing it larger than the small window below however. There is a Full Screen button at the lower right of the video.

I hope you enjoy!

Posted by Mike McNamara at 10:36 AM No comments: