As Bob Marley says in Three little Birds, "Every little thing...is gonna be alright"! Well, if you have this kit in your stash, I recommend pulling it out and getting started on it. It goes together easily and quickly, and you should have no problems with these at all, mon!

These three little sheds I built from a kit by KingMill called 3 Sheds at Cohasset. I built these as directed in the kit's instructions, including ideas on painting. The instructions are good and you should read through them all first as it will make assembly easier knowing what is coming later.

The walls were painted gray first and then drybrushed with Aged White over that to give the effect of peeling paint. I think that technique is pretty effective and I recommend giving it a try to see what effects you can create.

The roof material (self stick shingles and tin panels) was painted LV Cornell Red by airbrush. However after installing the roof, I still had to go back and repaint and touch up, so I m not sure painting it ahead of time really saved me any time or effort.

I finished these off using weathering powders from Bragdon, using grays on the walls and rusts on the roof, with some black applied sparingly here and there. 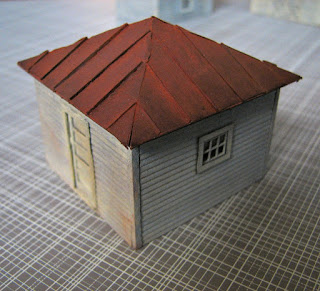 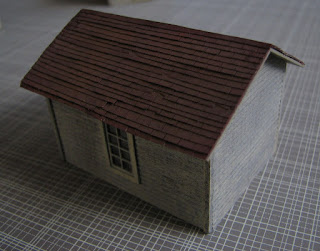 All in all a fun and easy time building these. A good kit for the beginner to the expert. Now, where to put these on my layout?

Here is the kit on the KingMill web site:
KingMill 3 Sheds

Their website indicates that these are sold out right now, but maybe you can find them at a show or hobby shop. You could also send KingMill an e-mail and let them know you are interested in getting these kits run again. 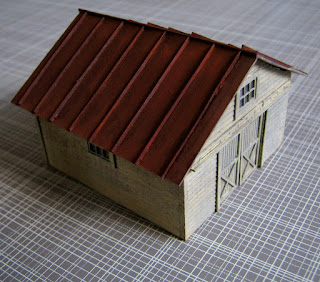 If you have any questions about these or want some photos, let me know in the comments section.
Posted by Mike McNamara at 11:33 AM 2 comments:

[FYI...yes, I updated the look of the blog. I figured after 5 years it as getting kind of stale]

Just back from the Big Hobby Show in Springfield, Mass. My second time there, I went up with my buddy Anton and also his father this year. We left Friday morning hoping to avoid the rush hours, but we still had lots of traffic going up I-95 and it took us about an hour and a half longer than usual. We arrived in Palmer in mid afternoon and had lunch at the Steaming Tender. Pretty good food and a beautiful station restoration. Hokey old music was a tad too loud, but all in all pretty nice. We went outside and watched some of the action as a CSX train passed and the New England Central sorted cars. That is the restaurant and next is my buddy Anton next to the 12 foot icicle hanging from the side of the depot. 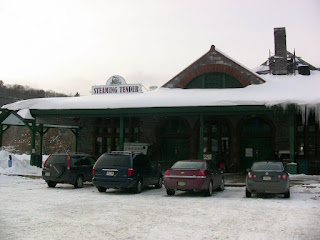 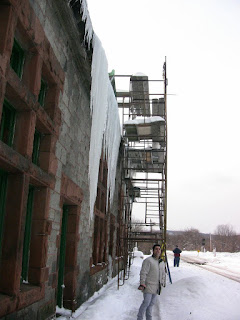 We were waiting on the northbound Amtrak Vermonter hoping to watch it do its reverse maneuver. It was getting late so we headed towards Springfield and in about 10 minutes heard that train 56 was due into Palmer in about 15 minutes. We quickly found a side road and stood trackside as the Vermonter passed at 61 mph. Here is some video from Palmer. I unfortunately screwed up the Amtrak recording so it is very short.

We stayed in the Hampton Inn in Springfield and it was pretty much filled with people there for the show. Almost like the convention hotel at an NMRA event. We headed to the show about 45 minutes early and waited in the car until about 15 minutes before the doors opened, then we got in line. We decided to focus on the biggest building first, the Better Living Center. I quickly found some Atlas Kaolin tank cars I needed for the paper mills on my layout and then came across Dave from Perkins Road Depot. He had wonderful custom painted and modified freight cars including some great wood chip hoppers. I had to have some! 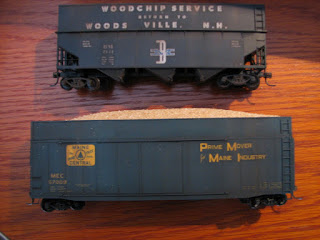 Other highlights included talking Flyers hockey with Mike Baker at Nick & Nora Designs, watching (and buying) 2 Blu-Ray DVDs on the CP/CN and the Pan Am/Guilford, saying hi to Dave Frary, and coming across other people I see but once or twice a year. Also checked out the latest kit from Stella Scale Models. I need to finish my New Erie Cafe before buying another one! Also looked at some great images by the guys at The Pixel Depot. Really nice shots of prototype railroads.

For the next 5 hours we walked the BLC building before declaring it complete and then spent the next 3 hours walking the Stroh and Young buildings before calling it a day. Mainly took advantage of show specials throughout the building to add to my goodies bag. We left about 15 minutes before the show ended. This helped us get out of the parking lot and get a seat at a restaurant before everyone else did. Apparently the attendance on Saturday was around 11,500 and totaled out somewhere around 21,000 for the 2 days.

On Sunday we walked the Mallery Building. Said Hi to Mike Rose and Scotty Mason, took advantage of great prices on Tsunami sound decoders and the Soundtraxx instant $5 cash back program, and picked up an EOT flasher that I can use with my Free-Mo modules (I pretty much model post-1990 on that as opposed to the layout where it is firmly 1980). Got to meet Jeff Adams of Motrak models, who I had previously did an interview via Skype on thr ModelRailCast show. Picked up some loads and his latest kit and Jeff gave me the 15% ModelRailCaster discount. Met Ron Kosmider of LaserModeling3, a relatively new company and pretty young guy for a manufacturer. They had 3 really nice kits, but they are a bit early for my layout. But he did show some nice simulated embossed tin panels that I can use for modeling the ET & HK Ide building. Finally something that looks like the siding on that building! Also talked to Atlas and found out that the long awaited (by me at least) GP40-2W locomotives should arrive in April. This will finaly give my Guilford SD26 company on the Free-Mo module.

All in all a great time and well worth attending. Looking forward to going next year and possibly arriving earlier to catch more trains in Palmer.
Posted by Mike McNamara at 1:47 PM 5 comments: