I have been in a caboose state of mind lately. Having gotten a few new cabooses over the past year, I decided to round them all up and do some basic upgrades to make them ready for the layout. As I received these, I pretty much just took them out of the box and put out them out there to test run, so they were all still a little shiny and such. They looked a little out of place in relation to my other weathered rolling stock and locomotives.

I started by bringing them all together and taking stock of what I have. I also looked through books and on the Internet for relevant pictures to see what I might need to do as far as details and weathering. One great book is Cabins, Crummies and Hacks: Vol. 1 covering the northeast. Lots of great photos there. 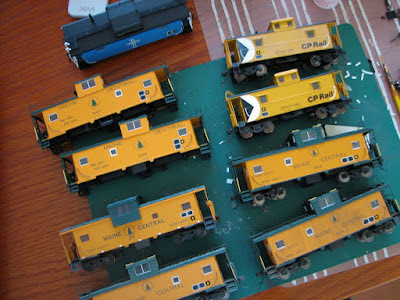 One of the main things I do with all freight cars is to paint the trucks and wheels with rust and grimy black. If nothing else, this (to me) seems to impart the most realism into the model. I use a brush to paint the wheel faces rust and the trucks grimy black. Usually this is enough as the rust dries dark enough to look pretty good. If it is too bright a hit it with a light coat of grimy black. I also take the opportunity to check the gauge of the wheelsets against the NMRA gauge to make sure they are accurate.

I also installed Kadee #58 scale size couplers. I have decided to try to standardize on these, concentrating on locomotives and cabooses first as these are usually most noticeable. Many of the models have the Accumate couplers which I have not really liked to much, in appearance or in operation.

The final standard upgrade i did to all cars is to install coupler cut levers. I use Detail Associates part #FC-6215 for this. I drill the #80 hole for the eye bolt and run the lever through it. I glue the end to the bottom of the coupler box making sure it does not interfere with operation of the coupler. Once dry I painted the lever with grimy black. A small detail to be sure, but it is neat when your eye picks up the bent wire ends of the lever as the train rolls by.

My roster has three B&M cabooses now, with the addition of 2 new Intermountain ones in B&M blue. These are really nice and pretty accurate based on photos I have looked at on-line. For my time period one of the important items to add are the consolidated lube plates an the U-1 wheel stencils (yellow dots). I used Microscale decals to add this to the models, right onto the existing glossy surface. The photos helped me find the proper placement of these items on the models. I checked the weight on these cars. Coming in at 2.5 oz. these cars are a little light (should be 3 oz.). I did not find an easy way to get the body off the underframe and did not want to risk damaging the details. So I will have to see how these perform and add weight later if necessary. The painting, couplers and cut levers finished up these B&M cabooses. 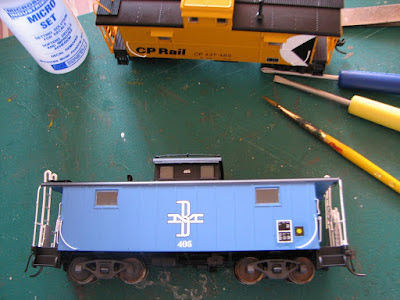 I also have a Athearn RTR caboose, #C23. The Caboose book actually had a great shot of C23, which shows the Athearn paint job is pretty accurate although the model is just close. I took care of the trucks and added the decals to match the photo.

My MEC caboose fleet has been built using the Atlas releases from the past few years. The first release was the wide cupola #670. I unfortunately only picked up one of these when they came out. I should have looked to see if additional road numbers were released, or picked up more and changed the numbers. So far Atlas has not done another release of wide cupola cabooses in MEC paint, although the MEC did have 13 others (numbers 640-645, 651-654 and 670-672). Perhaps another wide cupola caboose will be a future release coming up?

Atlas has since released two runs of standard cupola cabooses in MEC paint. Numbers 656 and 659 came first and have green cupolas. Then 657 and 658 were released in a different lettering scheme with yellow cupolas. Somehow I picked up an extra 656 model, so I used Walthers Solvaset on a q-tip to remove the numbering on the sides and ends and then used Microscale decals from set 87-903 to renumber it to 655 (which I have a picture of in the same paint scheme). I'm not sure of all the standard cupola cabooses the MEC had, but I only have found pictures of 655-659, so I might have all of them covered.

I should point out that none of these is 100% accurate as a MEC caboose model. The MEC caboose have varying windows and none of the steps are correct (the MEC had 3 while the models have 2). I can live with these discrepancies. Other modelers may want to address filling in the extra window(s), although paint matching to hide the work might be tough. And I believe Moloco makes a part to replace the steps with proper, more detailed 3 steps. It is just a question of how much of a project you want to make it.

For each of these I did the usual truck painting, KD #58 couplers and cut levers. These models already had the lube plates, so it was just a matter of adding the U-1 stencils, using prototype photos as a guide. I also checked the weight on each of these. They are just about correct. Being 5 inches long, the NMRA recommended weight is 3.5 oz. and these came in at 3.4, close enough!

I also simulated the end flasher on these caboose by cutting a piece of clear acrylic rod (Plastruct 92031), gluing it to the end and putting a spot of Tamiya Red Clear gloss paint (#X-27) on the end. This does enough to capture the look of the flasher. I also installed sinclair short antennas to the roofs and hit them with Polly Scale MEC green. 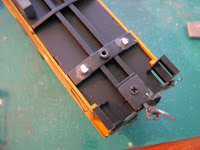 I did notice a problem with the first standard cupola release (656 and 659). These wobble very easily and rock side to side unprototypically. I compared these to the later release which does not exhibit this problem. What I found is that Atlas has molded 2 stabilizing pins into the truck bolster to keep the caboose from rocking. On the earlier release, these pins are not as long as the later release. So Atlas fixed this problem between releases. My fix was to also install longer stabilizing pins using styrene strip, sanded to match the angle of the bolster and glued to the other truck bolster to help stabilize the caboose. I made them a little long and then filed them until the trucks attached and pivoted OK while still keeping the caboose stabilized.

On the 670 wide cupola caboose, I finished up a project I planned to do a while back. While watching videos at one point, I noticed the flashing red beacon on the back of the caboose as the train passed by. I see these on the MEC caboose in the photos as well. I had already picked up a Miniatronics flasher with red LED and Tomar contact wipers. With everyting on hand, I decided to complete the project now. I will be writing this up for the MER Local newsletter and will probably publish the details on my web site. For now, here is a picture of the caboose done and ready for reassembly. 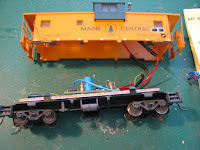 The caboose with the flasher looks pretty neat on the track. There is a little more resistance and less free rolling with the wheels having contact wipers, but this does not seem to be a big deal. It will look nice on the end of the train during the open house in November. 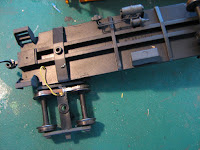 I also have an Athearn recent release of MEC #661. this is neat in that it has the covered window. I limited my work on this to painting the trucks and replacing the couplers.

Not addressed right now are my older pair of Proto 2000 NE style caboose models. I have never liked the orange paint on these - it just looks too orange and not like MEC paint. I am thinking about removing the lettering and masking off the green areas, then airbrushing some MEC harvest gold onto the model. If it looks good, I will then re-letter it. I'll cover that in a future post. 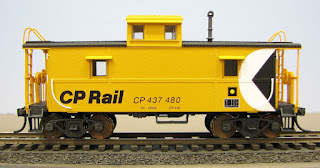 Moving onto the Canadian Pacific, I acquired a couple of the Atlas Trainman "C&O Style" cabooses. Again, these are most likely not 100% accurate for the CP Rail cabooses they represent, nor do they have the level of detail of the other cabooses, but I am OK with them for my layout right now. I added the U-1 stencil above the existing lube plate and also took care of painting the trucks and swapping the couplers for #58s. The rest of the model looks OK, especially for a $12 price tag! Maybe later I will look into a more accurate modern caboose for CP Rail, getting appropriate input from me CP modeling buddy Anton. 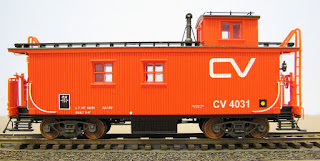 My last two caboose to be worked on are the True-Line Trains Central Vermont wooden cabooses. While these do have the CV noodle logo, I am not 100% sure they would have been in use on the Richford Branch in 1980. No matter, my modeler's license allows me to use these models on my layout! For these I added the lube plates, U-1 stencils and painted the trucks. I decided to leave the installed couplers as these are a scale size metal spring coupler that looks pretty good. I'll see how they working operation and replace if necessary.

Now all my caboose models are ready for final weathering. I'll use an airbrush to hit them all with dust and some diluted grimy black. Then I will finish up with some Bragdon chalks for soot, dust and rust. 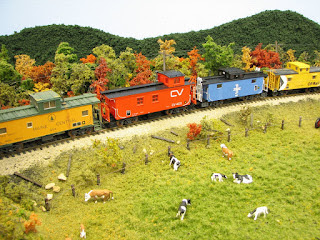