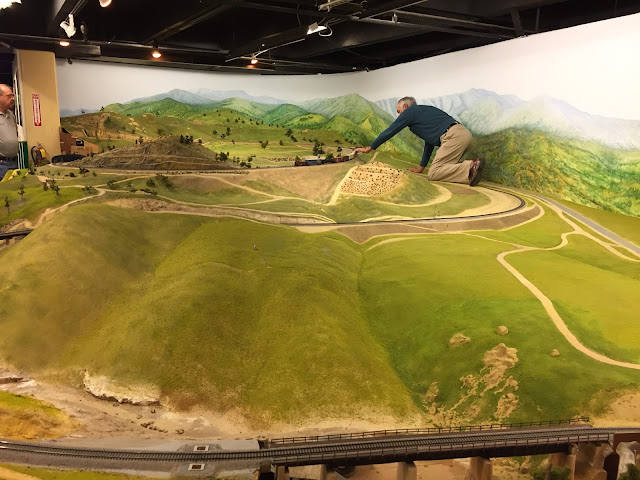 Posted by Mike McNamara at 4:59 PM No comments:

I have been doing a number of smaller tasks over the past few weeks. Just as important (sometimes more important) than the larger scenery or structure work, these are things that may not jump out for those visiting, but they help make the layout run better and look better.

After the last Op session, it was noted that 2 turnouts in St. Johnsbury were causing issues. One had a dead spot through the points and frog, and the other did not throw completely. I addressed these with a new feeder and a new throw bar. Small tasks, although it took a while to clear space under the yard to work, and then put everything back. I usually do not have to go under there.


I originally addressed the dead section of the other turnout using the Tortoise contacts. But I found that I was getting a short circuit as the machine threw. Seems the contacts would switch power before the point left one of the stock rails. I am sure there is a way around this, but I went the simple route and installed a Tam Valley Frog Juicer I had on hand.


I took the time while I was under there to solder feeder wires to each turnout in the yard should I need to address getting power to a dead point, closure rail and frog in the future on these older style turnouts. But I'm not going to invest in the time and cost of adding Frog Juicers unless (or until!) a problem arises.

I also addressed an issue with the Touch Toggle panel for St. Johnsbury yard. The frame I originally used had a cardboard back to press the toggles and paper schematic up agains the glass. Due to humidity this tended to not press tightly in the center area of the panel and operators had to press it from behind to put it up against the glass in order to get it to respond to a finger on the glass.

I solved this by going to a new frame with a wooden back piece that keeps everything firmly in place and tight to the glass. I also decided to screw it in place instead of velcro for a more stable panel.


I had previously nearly completed the ball signal and shack using the BEST trains kit, however I never did put a roof on the shack, so I completed that. I used sand paper and painted and weathered it as it better represents the look of the prototype in pictures around 1980.

The rest of that BEST kit includes the car shed and office for the Maine Central in Whitefield. My wife started this kit a while back, and finished it up by adding the roof shingles and gluing the 3 completed separate sections she completed together into 1 structure. We did not notice at the time, but the 2 side walls of the main building were reversed, so I will end up with the shed being reversed from the prototype, but I doubt anyone will notice. If you think about the side door being used to store a track speeder, you can see the issue and why the office door should be on the opposite end!


When I was laying out the MEC track into Whitefield I included a turnout for a siding to a local industry. Sometime later I glued down some wood ties figuring I would hand lay the rails for the siding. I have not really hand laid any track on this layout, and have not done so since an earlier layout that was going to be all hand laid. I can tell you at this point I much prefer flex track and think it looks better when properly weathered. But it was fun going a little old school for this siding. Much harder to see those spikes these days however!

The prototype Whitefield office had a large pine tree logo on a metal panel affixed above the doorway. I thought this was a cool detail so using some MEC decals I prepared some MEC signage to use on the layout. I painted thin styrene and applied the decals. These are ready to cut out and install now.

I started the process of building an Eastern White Pine tree as described by Mike Confalone. The trunk is a dowel with lots of holes drilled in it and then pieces of leafless cassia inserted and glued. Then the whole thing is painted with brown camo paint. Next steps involve spraying hair spray to the caspia and sprinkling green static grass to represent the needles. This is the first attempt, not sure if I have enough branches or not. But it is time consuming! For a good look at these completed, check out Ryan Mendall's post on Eastern White Pines on his excellent Algonquin Railway blog.


A while back I posted a picture of the roof of the FOS Scale Liqour store kit I was building. I finished up work on that by completing and installing the sign. I'm not sure I have a specific space for this on the layout, and it is a bit more modern due to the included signage (i.e. beer prices and logos not right for 1980), so I think this will go to the Free-mo module.


I also quickly put together a Bar Mills Basics kit I had on the shelf. I was looking for something to do while watching some hockey on TV, and this simple kit easily fit the bill. The whole thing is easily assembled in one evening, producing 2 cool little buildings for the layout. I painted the structure gray first, then did a dry brushing of the red over top to give the effect of paint that has peeled and fallen off.


Finally, while shopping in IKEA I saw these neat little carts on wheels for $30. They are very sturdy and have pretty nice casters on them. I decided to buy a pair and use them for scenery material. It will be easier to roll these out then hand grabbing stuff off the shelves under the layout where it normally resides.


These small tasks activities, along with restaging the layout for the next Op Session (as well as changing some things in the Ops plan), plus general clean up for the open house, have kept me busy.

Next up is the open house (hopefully I'll remember to take some pics) and then I plan to finally start building the ET & HK Ice building and replace the stand-in photo mockup. 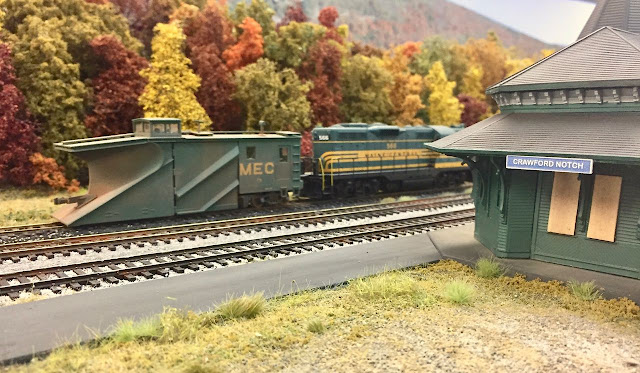 Posted by Mike McNamara at 3:44 PM No comments:

Most of my online postings have been here on this blog, as well as some posts on my Facebook group (Northeast Kingdom Model Railroad), as well as a few posts to the railroad-line.com forum. Preceding all of this activity was the web site I created over 12 years ago, nekrailroad.com. I put a lot of my research information on that site and continued to update it and add information over the following few years.

With the ease of use of this blog as well as the discontinuance of the software I used to maintain the website, nekrailroad.com has been pretty dormant the past 3-5years. I maintain some other web sites, and acquired new software about 2 years ago to easily maintain these web sites. However there was n real easy way to import the old sites. This wasn't a problem for the other sites which were relatively small. It was an easy matter of just building them from the ground up with similar, yet updated, content. The nekrailroad site though was more work, so I just put that on the back burner.

I've decided to put a few hours into updating the site by bringing it over to the new web site software. That work is now in progress, and I have started the update to nekrailroad.com: 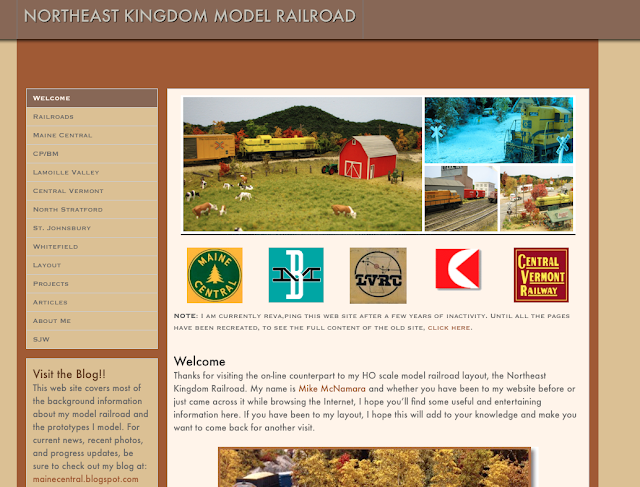 The overall look and content will be similar to the old site, but I will be able to update it more easily now, and fill in some new or missing areas. It will better document the layout and be easier to get to a specific topic, and more easily get to research info I have documented.

This will be an ongoing process, so not everything is done yet. The content from the old site will move over a period of time, so I am providing a link to the full content of the old site, as noted on the first page. This can be accessed via nekrailroad.com/NEKOLD/Welcome.html.

I'll still mainly post updates via this blog, but will probably copy a few things over to the nekrailroad website as well, such as finished work for example.