Well since my last posting we had quite a bit of winter here, but now things are really nice as we roll into summer. I have not had a lot of time to get things done on the layout due to other projects, some traveling, and work.

After the Springfield show in January, I packed away the Free-mo modules as I would not need to get them out until the Fall. I had spent a bit of time getting them more detailed with structures and scenery, and it definitely took time away from the layout. I figured the modules were good for now, and I can do some minor work on them just before any shows upcoming next Fall and Winter.

I read on the MRH forums about Mike Confalone adding significant weight to his freight cars, well beyond the NMRA RP. He is in the 11 to 13 ounce range, whilst the NMRA recommends around 4.5 ounces for these size cars. I decided to try out some extra weighting on a few cars. I used leftover hardware I had on hand to bring some box cars up to 8 ounces. Not as much as Mike C. but definitely a big difference. In doing some switching I did find that the cars performed better and the couplers would engage easier with the cars offering more resistance. As of now I have not decided if I want to go even heavier. I have about a dozen cars completed and want to do some more test running. Here are a couple boxcars getting extra weight, with a couple heavier cars on the rear siding.

Mike C. discusses extra weight at length in his e-book available from MRH. Check out mrhmag.com for a link to the e-book.

I also took some time to install some DCC decoders I had picked up a while back. I have a few locos needing new Tsunami sound and I addressed a few of those, including a B&M GP7 and a CP RS10 with dual speakers.

On the layout itself, I finished up ballasting at Crawford Notch and most of the basic scenery. I still need to build and install more trees on the hill behind the tracks, but that will probably wait until the Fall before the open house season kicks back in. What I decided to focus on was the area of Johnson Vermont along the LVRC. This has been a pretty good storage space as it is right inside the door to the layout, a large flat surface that always accumulated stuff.

This is downgrade from Morrisville with a curved turnout allowing access to a talc mill scene to be built. I have had trouble with this turnout and knew I wanted to replace it. I also knew there was no way I was laying track on the foam base installed here. I laid some track in Hardwick on a foam base and I have regretted it. For now it remains that way, but most likely when I rebuild the quarry scene in Hardwick I will put down proper sub roadbed. Others have seemed to do OK with a foam sub roadbed, but I find it noisy and not particularly strong when cleaning the track.

So I pulled out the existing track and turnout on the LVRC main, and also pulled out the foam sheet for Johnson. I built proper support risers for the scene, and cut down the fascia so the scene was not set below the fascia as it had been with the foam. 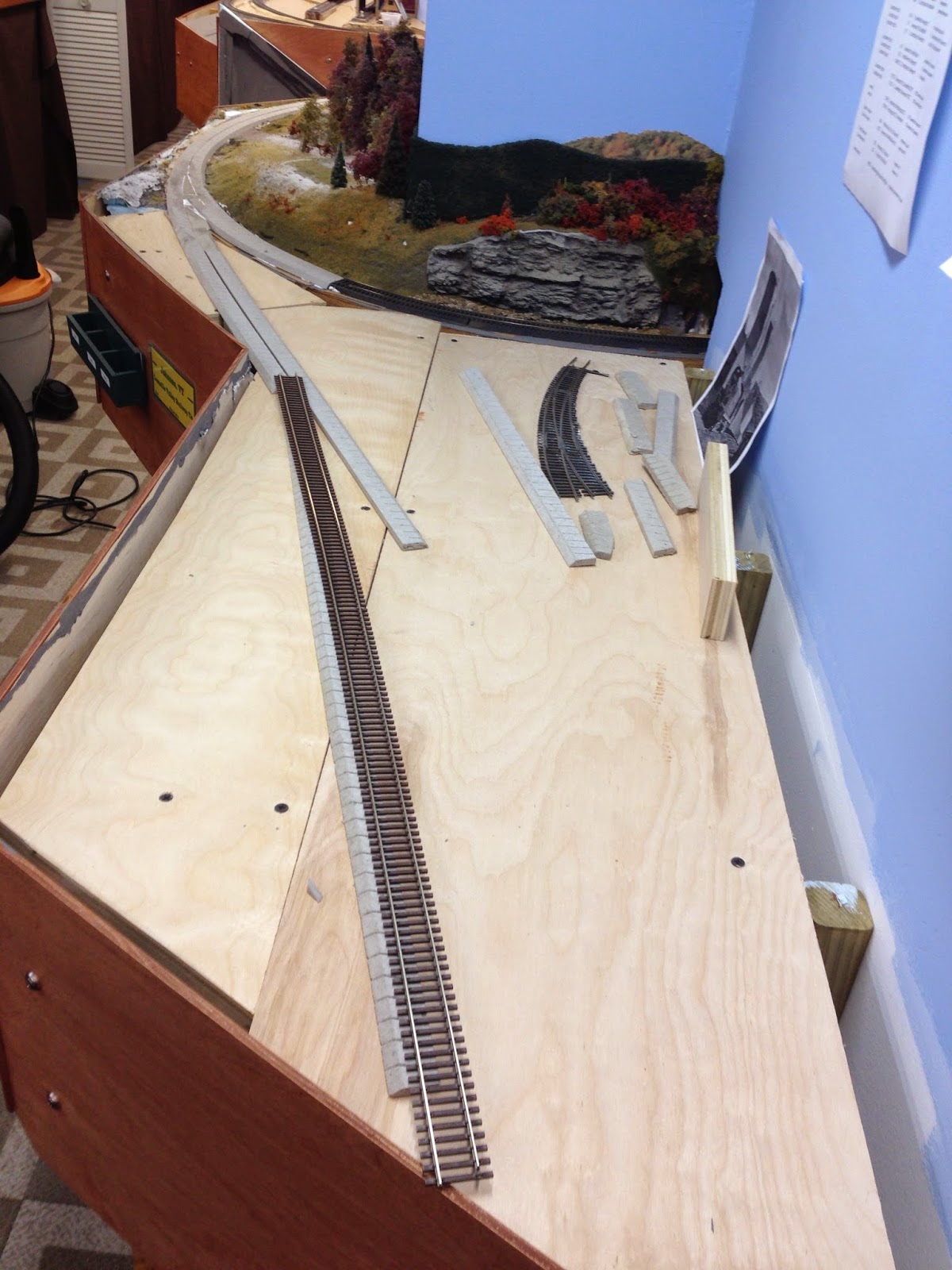 I played around a bit with track arrangements. At first I thought I would try to put a runaround into the scene. This would allow trains entering the scene to get around their cars and serve the sidings. The problem was I really did not have enough room for this, and really it wasn't too prototypical. Johnson had sidings, not an extended branch where a train would travel too. The solution is to have trains pass Johnson and head to Sheldon Jct., and on the return trip work Johnson as the trailing point industry that it is. This solved track work issues but also makes the operations more interesting, and more prototypical.

While I waited for a new turnout to arrive, I used my backdrop images from LARC to install a new mountain range behind the area. I also started work on VT Rt. 15 as a bridge over the tracks, to help hide the LVRC main heading into the wall, and as scenery behind the talc mill. 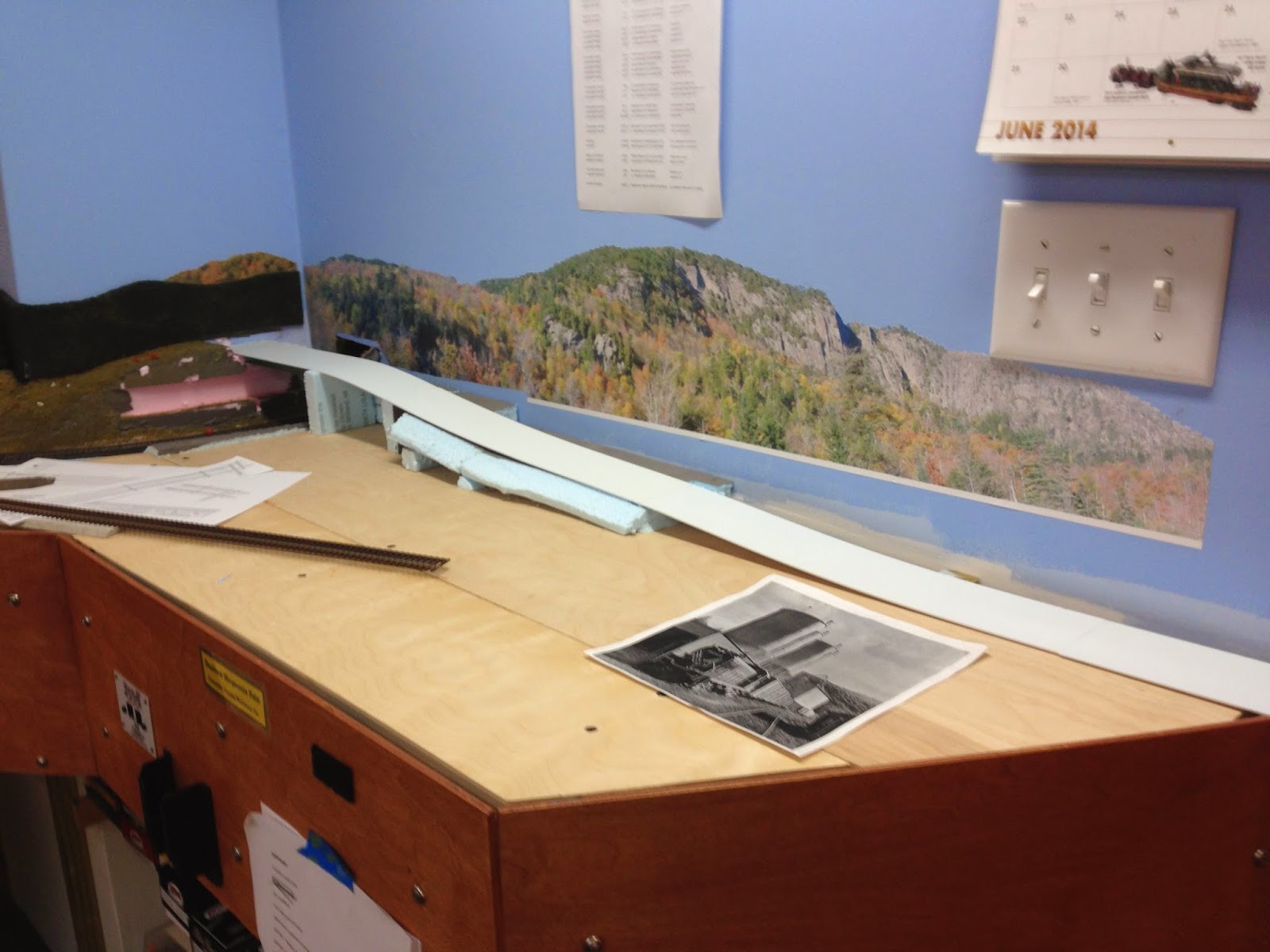 Next up will be getting more rough scenery in around the roadway and back to the wall, and installing a tree line behind the road to blend into the backdrop. I also will install the new turnout and lay the sub roadbed and track for the talc mill. I need to mock up the talc mill buildings, based on photos from Johnson in the 1970s.

So that, along with adding weight to some more cars, will keep me busy during the summer. Hopefully the scene will be nearer completion by the time the November open houses hit.

One other piece of info: The NJ Division of the NMRA will be hosting the Mid Eastern Regional convention in Mt. Laurel, NJ during October 22-25 of 2015. Yes, a year and a half away. What this means is my layout can be open for the layout tour, but also could host operating sessions. This means I need to keep building and also get the guys over for a test Op session to see how things go. I figure I need a couple of these sessions completed before having a group in to operate during the convention. Much of the operating session plan, train cards, car cards, waybills and infrastructure is in place, I just need to put the layout through the paces and see how things go. Then adjustments can be made. If no track exists in Lyndonville or North Stratford (the 2 remaining locations to build out) I can leave those trains off the schedule.

So that is what I have been up to and what I will focus on in the coming months and year. Thanks for reading!
Posted by Mike McNamara at 11:11 AM 4 comments: