One of the signature scenes on the Maine Central's Mountain Subdivision is the ball signal protecting the crossing with the Boston & Maine in Whitefield, NH. Even in 1980, the time period of my layout, train crews would stop here and raise or lower the ball signals to get authority to cross the diamond.

On my layout I have included this scene and have had the Best Trains kit of the signal and supporting structures ready to be built for some time. Recently, my wife was interested in working on another structure as she has done in the past and I pulled this kit out. She worked on the signal shanty and car shed while I assembled the ball signal. I used some craft beads for the ball signals instead of the ones supplied in the kit as they represent an older style which was replaced in the 1970s.

Once we had the shanty and signal complete (although the shanty is still without the faded tar paper roof like the prototype shot above), I could not resist mocking up the scene on this unscenicked area of the layout. I posed a MEC and B&M locomotive here and recorded the grand moment. 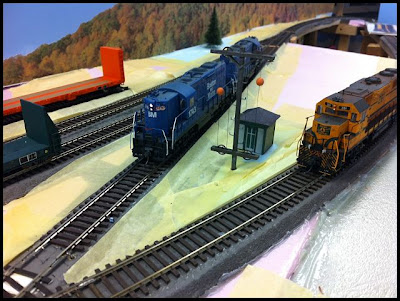 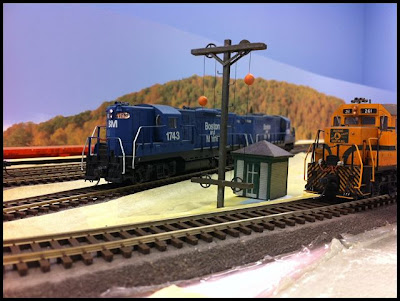